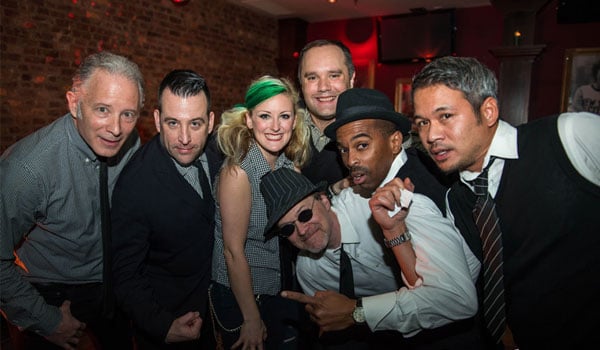 Are you a fan of Ska and Reggae? How about New Wave as well? Well you’re in luck because Rude Boy George have been playing ska/reggae versions of New Wave songs for almost a year now. You might have caught them playing at Characters in NYC a few times last year. The band consists of members of Bigger Thomas, Across the Aisle and some other NY area bands. The ReadJunk staff sent over some questions for co-singer Roger Apollon to answer. Here’s how it went down:

1) How did this new wave/ska cover supergroup come about? Has Boy George sued you yet?
The idea of the band was something that Marc and Steve discussed over a year ago. Marc told me about the concept and asked if I would be interested. 80’s New Wave? Reggae/Ska? I’m in! As it happened, Morrissey was playing at BAM around that time and the three of us decided to go. Before the show, we had dinner at a Haitian restaurant across the street and really started to figure it out. Marc and Steve had a monthly show in NYC (Electric Avenue) and got to see a lot of great bands and musicians over the past year. One singer who we felt we HAD to have was Megg Howe from Across the Aisle. Her voice and energy (and the fact that a lot of 80’s tunes feature female singers) made her a must. Jim Cooper from Bigger Thomas was a natural next choice as he and Marc have played together for over 25 years. We initially had Spencer Katzman from Bigger Thomas as well as he was our de facto musical director and a great musician. I’m not sure who reached out to Dave Barry on keys but he was another (no pun intended) key acquisition as he is probably the best ska/reggae/jazz/whatever keyboard guy around!

As for Boy George, we have sent MULTIPLE email and snail mail messages to his management company telling them of our band name. We have gotten no response. Our consciences are clear that we tried our best to contact him however, if (or when) we get more attention, we may yet hear from him.

2) You just released an EP called Take One. What was the process like and how did you decide which songs to cover and put on the album?
The process was amazing! We played about 4 or 5 shows and decided to go and record 3 songs for an EP. Marc (and I) knew Wayne “Wayylo” Lothian from playing shows with the Special Beat and English Beat. Marc was really the one who kept him abreast of what we were up to from the beginning. As it turned out, Wayne decided to take a break from the non-stop touring with Dave Wakeling and wanted to focus on music production. I believe Marc asked him if he would be interested in producing the EP. To be honest, he lives in LA and has toured and played with some of the biggest acts in music so I didn’t have much hope that he would do it. Not only did he want to produce it, he wanted to FLY IN for the recording!! On his own dime, he flew in for a weekend and we recorded 3 tracks in 8 hours. The best part (for me) was working with a professional producer who had a very clear idea of how he wanted to songs to sound. He was very encouraging and that positive energy made the session a breeze.

We always were going to record “Fascination” and “Don’t Change” as they were the first songs we learned that really came together quickly. We were trying to do “Tempted” but it was a bit more complicated (we WILL record it for the full length!) and we all weren’t all that confident of doing it in the studio. We toyed with “Cars” but, at the time, it was still in the woodshedding stage. “Talking In Your Sleep” was chosen because we knew that song pretty well and time was of the essence. It turned out to be a great substitution as that’s probably my favorite song on the EP right now…

3) The 80s was one of the most fertile and diverse eras of music. How do you decide what to cover? Do the originals need to be new wavey and synthy, or can we expect a Phil Collins or Ratt cover at some point?
Song choices are pretty random right now! It’s a free for all with emails flying around with all kinds of suggestions. We came up with a “List” of something like 30 songs that we said we would do so there could be some order but nobody looks at it!

As it stands so far, we’re stick to 80’s New Wave since that’s “our thing”. Not sure if I would be able to convince the band to do “Round and Round”…

4) Do you see RBG leaning toward the karaoke hits or are you more interested in going deep into an artist’s catalog?
It’s a bit of a juggling act. We want to cover songs that haven’t been covered before and like the “album cuts”, but at the same time, we know when we tell people we do 80’s New Wave, they want to hear stuff that was popular back then. I’d say it’s a 60/40 split between album cuts and popular tunes…

5) You’re a new wave cover band yet I don’t see a keytar player in your lineup? What’s up with that?
We haven’t been around a year yet!! Give us time!! LOL!

6) Have there been any songs that you absolutely love but simply cannot possibly translate over into ska music? What are some tunes that you tried shoehorning but didn’t work out?
This happens more often than not. At our very first rehearsal, we thought Billy Idol’s “White Wedding” would be a perfect ska tune! Wrong! It was very dry and didn’t sound that much different from the original. Although we learned and played The Smiths “Ask” live, we found the same thing even though we messed with the song structure and added the Fishbone “La, la, la, la, la, la” bit from “Lyin’ Ass Bitch”. It’s a bit of a drag because you spend precious rehearsal time learning a new tunes only to decide they don’t work. Oh well, that’s the process!

7) Has there been any consideration in making original music, inspired by new wave?
Yes! There are a couple of tunes and lyrics that we’ve kicked around as of late so that’s definitely on the agenda.

8) Do you consciously avoid songs that might come off as kitsch? (For instance, Rick Astley’s Never Gonna Give You Up or A-Ha’s Take On Me)
We really don’t have our antennae tuned for kitsch. We are like minded group and have very similar tastes in 80’s New Wave so “out there” songs have not really come up. The driving force behind what songs are considered is what songs the individual members like.

9) Rude Boy George have stuck with playing in the NYC area but are their plans to tour outside of NY this year?
The plan was always to be the Electric Avenue house band for the first year. We needed a safe place filled with friends and family to try our stuff out. Now that we’ve done that, you’ll see us play more and more out of state. We’ve got a BIG show coming up in NY state so be on the lookout for that one…

10) Do you think there’s a challenge in attracting a younger audience to 80s music? Hate to say it, but an 18-year old kid today was born in 1996.
The biggest challenge is not whether a younger audience will enjoy the music, it’s finding the venues that would book us to play in front of that crowd. When I play the music for the students I teach in high school, they love it! They don’t know the originals and just hear the songs for what they are: good music! However, when promoters and clubs hear “80’s New Wave”, they automatically pigeonhole it as “nostalgic” and “older crowd”. I believe that if we were to open for Macklemore, the crowd would be into it.

11) Since the new wave/post punk era of music was specifically chosen for this project, is there any boundary that Rude Boy George would cross in terms of the music or even the time frame?
Right now, there are SO MANY songs from the 80’s that we want to do, we can’t even think about another era! Let us get through our “List” first and they we’ll see…

12) Here’s a series of random 80s questions:
1) Best concert you saw in the 80s?
Steel Pulse at the old Pier in NYC! Absolute transcendent!

2) What is one fad of the 80s you wish never existed?
Parachute pants! They look REALLY stupid now.

3) Funniest 80s movie?
Airplane! I laughed with tears streaming down my face!

4) Your favorite 80s TV show?
Diff’rent Strokes! ESPECIALLY with Janet Jackson back then!!

6) Would you ever consider doing a new wave/reggae version of the theme song to MacGyver?
Theme songs are out. Talk about kitsch!

7) Exactly how safe is the Safety Dance?
Not very. Apparently, if your friends don’t dance, they risk alienation from the members of Men Without Hats.

9) Do you feel Walk Like an Egyptian is racist toward Egyptians?
You mean they don’t walk like that? I don’t understand.

10) Who do you like the most: The Cult, The Jam, or Lisa Lisa & the Cult Jam?
I have to ask you a question: I wonder if I take you home, will you still be in love with me because I need you tonight…

You can purchase Rude Boy George’s Take One EP at their Bandcamp page, Amazon, iTunes, or just check them out on Spotify as well! Check out their official website and like them on Facebook as well.