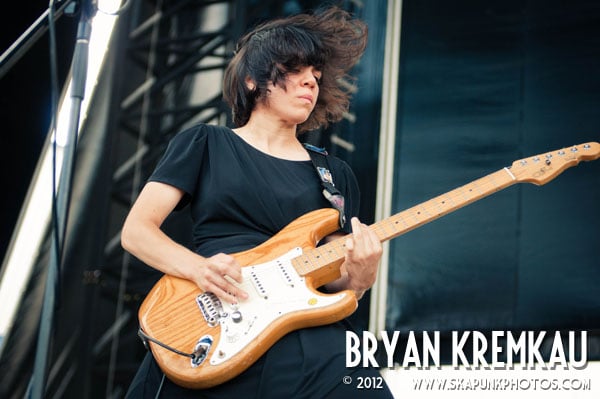 There is a video floating around on YouTube of a young lady on stage with Ted Leo and The Pharmacists performing a cover of “Since You’ve Been Gone.”  Ted Leo’s personal rendition of the song had already been widely popular but in this version he left all the vocals to their female guest, Marissa Paternoster.  She is the singer and guitarist for Screaming Females.  While on tour with Ted Leo & The RX, someone heard Paternoster singing the tune backstage and insisted she perform the song that night.  “They didn’t even rehearse or anything.  It all happened during the show,” said Screaming Females drummer Jarrett Dougherty.

Hailing from New Brunswick, NJ it would be easy to pigeonhole them as a punk rock outfit.  The group is a strong participator and supporter of the basement scene there.  “There aren’t any venues,” Paternoster exclaims.  Therefore, bands put on shows in basements and play to a relatively large 20 and under crowd.  “If you’re a young band, it’s really hard to book and play a good show.  New Brunswick gives bands a great opportunity for a place to play,”  Dougherty explains.  “We want to make [our shows] accessible to everyone.”

Yet, if the YouTube video is any indication, this New Jersey outfit is so much more and will appeal to music listeners of all ages.  Screaming Females played Chicago’s Empty Bottle in May of this year.  Alternating between wailing and screaming, Paternoster truly knew how to use her voice if not down right manipulate it.  Her psychedelic guitar riffs and voice, reminiscent of Grace Slick, perfectly complimented each other.  The different genres of music Screaming Females incorporate could be an anomaly if they didn’t execute it well. There is King Mike’s thick bass line and drummer Dougherty’s steady pop beat.  Combined they form a curiously strong cocktail of psychedelic, punk, and pop.  That pop infusion may have something to do with Paternoster’s affection for radio hits like “Since You’ve Been Gone.”  “If you’ve heard one, you’ve heard them all and they’re all fantastic,” Paternoster said.

The group is currently on tour in support of their album Castle Talk (out now), playing some 21+ shows as well.  You can catch them this Saturday at the Portage Theater in Chicago for the benefit Brew Not Bombs. They will end their stateside tour with a handful of dates with Ted Leo & The Pharmacists.  Ted Leo himself seems to have become the group’s biggest supporter.  At any given week, you can find him mentioning Screaming Females on his twitter account.