First off, thanks for doing the interview. So you guys are from RVA via Boston, where do your roots actually start? When you started playing, you were in Boston at college, what school? Did you graduate? What were your majors?
Well, this has been a little confusing for people apparently, we don’t live in Richmond anymore. Ken and I were the last ones to leave RVA and that was almost a year ago. But we are originally from Boston.Joe was going to school at BU and Ken was at Northeastern, I went to school in Amherst, MA. Joe as a graphic design major and Ken and I were both English majors. We all graduated, and I must say, those degrees have proven themselves to be worth the money and then some. We’re really putting them to good use.

RVA has an incredible musical past, Inquisition, Gwar, Avail, The Richmond Boys Choir, etc. What was it like in RVA trying to get shows > and the shows themselves. How about Boston, shit, bands from Boston are huge.
When we were living there we used to put shows on at our house, so getting shows was never really a problem. We’d just invite some of our friends bands from around town and there would usually be one band from out of town. We’d buy a keg and charge a couple bucks for cups and give whatever we made to the touring band. So in that respect the shows were amazing. There was tons of support. I don’t know, we just had awesome friends and an awesome community of bands and people who wanted to hang and have a good time. Boston was quite different. I mean, I guess we played house shows, but not on the same level as in RVA. Most of the shows in Boston were, and are, in a club setting. It’s not really better or worse, just a totally different scene. The Middle East in Cambridge is one of our favorite places to play in the country, so it’s got that going for it. But I don’t think much could match what we had going on in Richmond for the first few years we lived there. We love that city and it will always feel like home, to me at least.

Who are you listening to currently?
‘Here Come the Waterworks’ by Big Business. Hot Snakes. Neurosis. The Marked Men.

What bands are your favorite of all time?
Man, that’s tough. American Steel is huge for me. The Jealous Sound. The Replacements. Hot Water Music. Avail.

Are you going to the Inquisition reunion shows? Tell Mark i said hi, if you are, my brother and I put River City High’s first show in Jersey on like 8 years ago.
Nah, I won’t be there. Like I said, we don’t live there anymore.

I have some easy questions…
Mac or PC?
Mac
Can, Bottle or Draft?
Bottle
Onion Rings or French Fries?
French Fries
BBQ Sauce or Honey Mustard?
That’s a toss up. Good question though
Favorite Drink?
Jameson and a Bud
Burrito or Taco?
Burrito, totally Brah

Where’s your favorite venue to play and why? Do you prefer big shows or small shows?
We love playing in Gainesville, FLA. Richmond, VA, and The Middle East in Cambridge (Boston). Gainesville and Richmond just have so many awesome people attached to the scenes there. Common Grounds in GVille is amazing. Cool set up, good sound, better people. And it’s always hot so people there are fucking nuts and that’s fun to be around. Richmond’s like home, so it’s always great to go back there. Small shows are always the best, as a generality, but when you’re playing a club you want there to be as many people as possible. So, big and small I guess. The both have their charm.

How do you think the scene and punk rock in general has been effected by Myspace, PureVolume, Friendster and the other social networking sites?
Well, it’s certainly made it easier for bands to market themselves, get their name out there. But that’s a positive and a negative. You have a lot of shite bands getting tons of hype because they have a million “friends”. So, whatever. These are the times we live in. Was it better before all this stuff? Probably. But there are also a lot of smaller bands who can get noticed without the help of labels and money sucking endeavors like that, so I guess it’s helped some too.

What would you guys be doing if you were not in a band?
Selling hot dogs out of a cart on the side of the street to bankers on their lunch break.

After the tour’s over, what’s next?
More touring probably. Write another record.

You playing Jersey anytime?
Chances are

Thanks for doing the interview, anything you want me to know about me?
No thanks, but thanks for the questions. This was a good one. Live the dream!

BigWig, Title Fight, Into It. Over It., Smoke or Fire and more playing The Fest 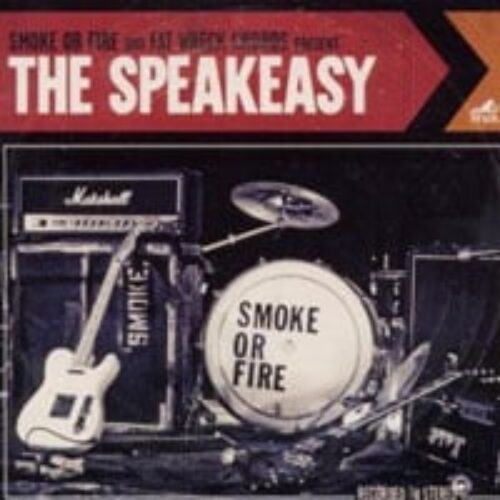 Smoke or Fire – “The Speakeasy”