I spoke with drummer/songwriter Luke McNeill about music, philosophy, and life. After a brilliant conversation, I then asked him these questions.

Is your name The Copyrights because you stole Screeching Weasel’s sound?
Um, yes? We copied them right, right?

Isn’t pop punk just the poor man’s ska?
First of all, I guess I’m ok with the classification “pop-punk,” because then people know that you are talking about melodic, high-energy rock, but I don’t really think bands like Dillinger Four, Lawrence Arms, Toys That Kill, The Ergs, or even Screeching Weasel are pop-punk. I think they are melodic punk-rock bands. No one ever calls the Ramones or the first few Clash records or the Buzzcocks pop-punk. I would like to think of us as a melodic punk rock band, but I guess it’s easier to say pop-punk. And is it the poor-man’s ska? No, because all of the bands in the genre do it because we love it, not because it is popular and/or a gimmick. This should be obvious since it’s such a small scene of passionate people. As soon as ska was out of style, most of the bands either changed their sound or quit to join screamo bands. In this genre, there is no dress-up, and the songs have to stand on their own.

Is theft of intellectual property “punk rock” or lame?
Oh shit, you accidentally asked an interesting question! I’ll answer it anyway. At this point, if you believe in the concept of intellectual property, it is very lame, because filesharing is prevalent enough now that it hurts even the smallest artists, like us. From a practical standpoint, why spend any money recording a record anymore if you can’t recoup hardly any money back? I realize it’s fun to play and record music, and that’s why we do it, but also we are not made of money, and it’s expensive to do a record.

What do you hate most about your fans?
Their faces, and their existence.

What are five songs you didn’t write but would gladly take credit for?
– Pray for Rain – The Ergs
– Hateful – The Clash
– Havana Affair – The Ramones
– Wouldn’t it be Nice – The Beach Boys
– Fuck Authority – GG Allin

If you had to choose, would you rather make out with your bandmates for an hour and have it posted on YouTube, or make out with your own grandmother for 5 minutes, but no one would know?
Hahahaha. I laughed out loud reading this question. I guess my grandma, fuck, that’s tough though. It would only be five minutes though, and I wouldn’t have to deal with Brett’s stinky ass or Jeff’s creepy-crawlies.

What is your #1 regret about your latest album?
Maybe the sequence? I possibly would have started the record with “Two Left Feet” instead of “Second Hearse Same as the First”.

What are three things people would be shocked to know about you?
– I’m married.
– I’m an attorney.
– I can’t really play eighth notes on the hi-hat anymore, nor do I want to.

Describe your band as if today were opposite day.
An awesomely tight, professional band full of cool, nice dudes who always have something positive to say about you.

What should I have for dinner tonight?
Weed.

The Copyrights’ new album is Learn The Hard Way, a nod to their lengthy legal battle with the RIAA who own the term “copyright.” Visit The Copyrights at www.myspace.com/thecopyrights. 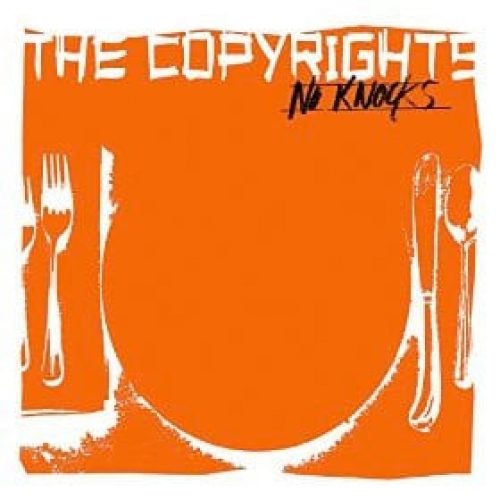 The Copyrights – “No Knocks”

The Fest 13 adds Mineral, Paint It Black, Jeff Rosenstock, The Copyrights and more!