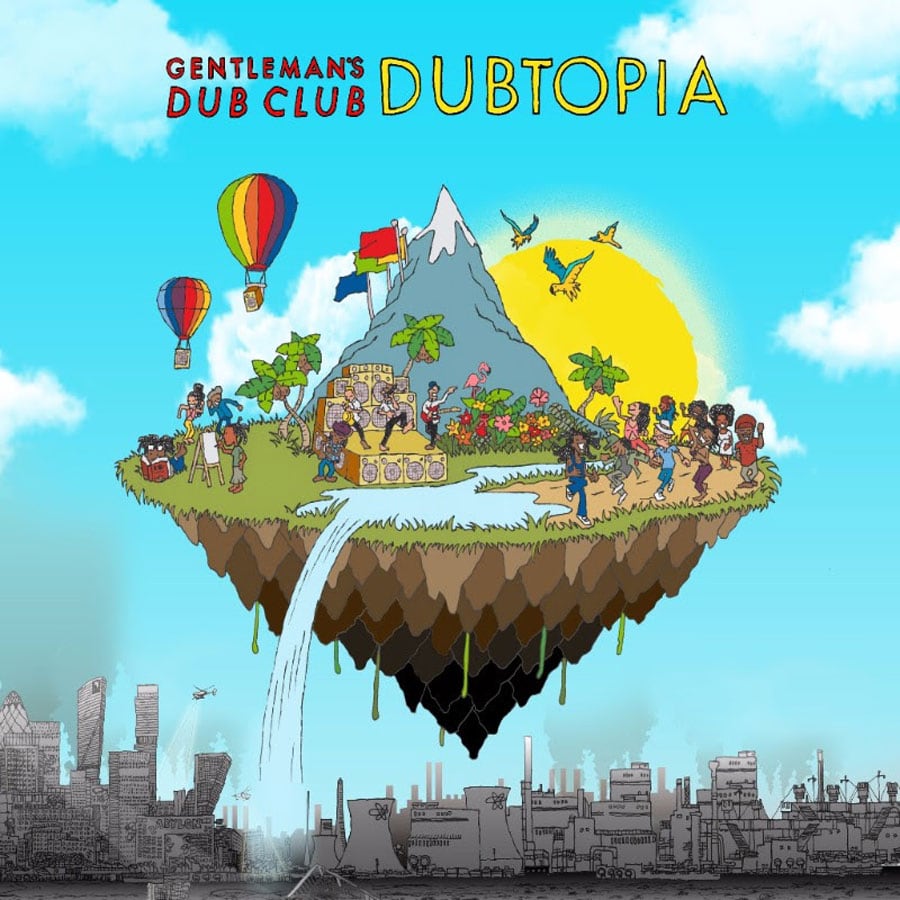 Gentleman’s Dub Club have a brand new album called Dubtopia, coming out April 7th via Easy Star Records. The UK reggae band have premiered their single for the album called “Dancing in the Breeze.” Sounds good, can’t wait to hear the rest of the album!


Gentleman’s Dub Club and Easy Star Records are proud to announce the launch of pre-orders for Dubtopia starting today. All orders will receive an instant download of the songs “Dancing In The Breeze” and “Fire In The Hole” featuring Parly B and Eva Lazarus. ‘Fire In The Hole’ is sure to find a good home in the sound systems of fans around the globe following the attention-grabbing first video single “Dancing in the Breeze.” The physical pre-order in the UK will include signed CDs, an exclusive new shirt, limited edition clear vinyl LPs, and an album cover sticker in all orders. The physical pre-order in the US will include the exclusive shirt and the vinyl. It will also be available digitally via iTunes.

Dubtopia is the result of clear intent and laser-focused direction. By sharing a common vision and cultivating a creative environment, the band delivers its listeners a cathartic release from a world shrouded in injustice and hypocrisy, providing “a musical paradise set apart from everyday life intended for pure celebration.” Dubtopia in its entirety will be available everywhere via tastemaker label Easy Star Records on April 7th, 2017.

The Gentleman’s Dub Club are a group made up of nine well-rounded musicians attune to every step of the music composition process, safeguarding every detail of their shared vision from the rehearsal room down to the mixing board. The nine-members include Jonathan Scratchley (vocals), Tommy Evans (drums), Luke Allwood (Keys), Nick Tyson (guitar), Toby Davies (bass, synth), Niall Lavelle (percussion), Matt Roberts (trumpet), Kieren Gallagher (sax), and Harry Devenish (sound).

2016 was an active year for the Gentleman’s Dub Club, supporting their previous release, The Big Smoke, in addition to collaborating with top producers on The Big Smoke Remixed, all while keeping up their high energy live performances. The Big Smoke gained traction across the globe peaking at #1 on the iTunes Reggae Chart, symbolizing a giant step forward from their humble beginnings of jamming in a basement in Leeds. The material in Dubtopia came together by bouncing ideas off each other at every moment of inspiration. Full band rehearsals allowed the band to architect the songs in a way that stayed true to the magic and energy that radiates in their live shows, setting Dubtopia apart from their prior releases. The band sought new creative contributions to add another dimension to their already established style; This included bringing in many featured artists for a brilliant change of pace. Features include Lady Chann, Taiwan MC, Parly B, and Eva Lazarus.

Writing for Dubtopia started back in late 2015 at the London Speaker Hire Hackney Wick rehearsal space. Tracking took place at bassist Toby Davies’ studio ‘27 Club’ located in ‘The Chocolate Factory’ with vocals and horns recorded at Evergreen Studio. Drums were laid down by Evans in less than 12 hours at The Fish Factory. The Gentleman’s Dub Club used an assortment of acclaimed microphones and equipment as well to capture the essence and nuances of the songs.

Fans of the Gentleman’s Dub Club will be pleasantly surprised by the number of high-energy bangers in Dubtopia. This transition came as a result of their natural musical refinement, channeling the energy of their live performances, and honing in their songwriting technique and studio skills. Layers of sonic vocal harmonies and multi-part horn lines on a bed of deep dancefloor-friendly dub make Dubtopia; From the one-drop rhythm of “Dancing In The Breeze” to the featured vocal changeup of “Fire In The Hole,” it is reminiscent of something out of the Major Lazer camp. Dubtopia provides an instant getaway from the drop of the needle down to its last track. “Let A Little Love,” “In Your Heart,” and “Sun Kissing” show a delicate balance of sweet and upbeat that is sure to put smiles on faces. Staying true to their name, dub-effects gracefully overlay the entire album with drops at just the right moments.

European fans will be happy to see the extensive tour announcement, including a large headlining show in London at the Troxy, shows in France, and the band’s first ever Moroccan performance in April.

Dubtopia will be available for fans all over the world through Easy Star Records on April 7th.