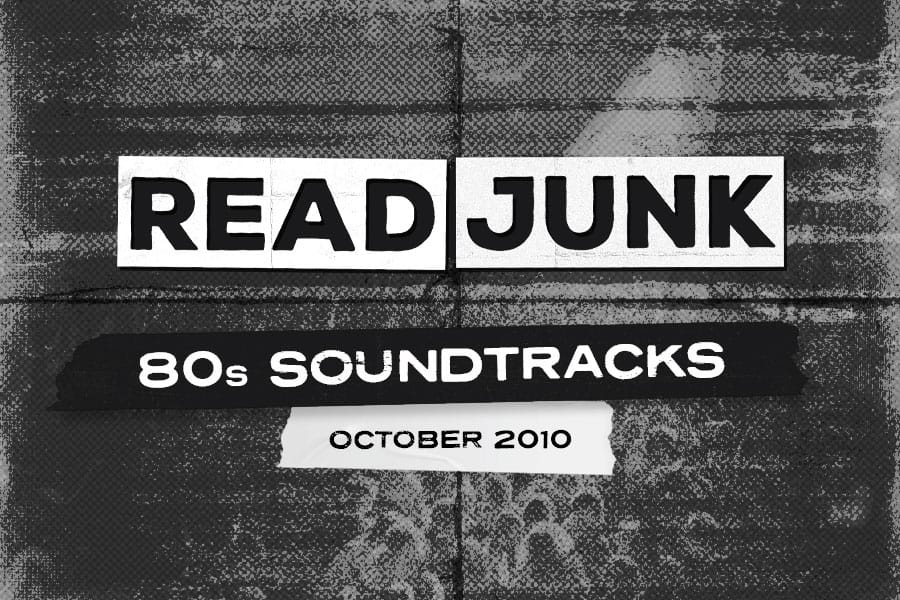 Let’s just get this out of the way, ‘80s movies are awesome! Besides the movies themselves, what makes the ‘80s movie so great is the music. I guess it depends if you liked the music from that decade though. The ReadJunk Playlist of October isn’t Halloween themed because we did that last year, but it’s ‘80s movie soundtracks! I practically list every song from an ‘80s movie but I’m sure I forgot or omitted a few. Some of the songs below might not be on the official soundtracks but could definitely be heard in the movie or tied to the movie in some way. Don’t be a pencil neck, check out the ‘80s soundtracks playlist below!

1. Yello – “Oh Yeah” (Ferris Bueller’s Day Off)
Figure I’d get this one out of the way with the opening track on the playlist. OH YEAH!

2. Huey Lewis and The News – “Power of Love” (Back to the Future)
One of my all-time favorite 80s songs and one of my favorite movies of all time as well!

3. Kenny Loggins – “Footloose” (Footloose)
Be prepare for Kenny Loggins overload on this playlist. The man was a 80s soundtrack good-to-guy!

4. Michael Jackson – “Thriller” (Revenge of the Nerds)
Get high and nerd out to “Thriller” while the head of your black fraternity watches on.

5. Tears For Fears – “Everybody Wants To Rule The World” (Real Genius)
I want a house filled with popcorn! This is also the theme song to Dennis Miller’s old HBO show, but that started in the 90s.

6. Peter Gabriel – “In Your Eyes” (Say Anything)
Simply a classic!

7. Cyndi Lauper – “The Goonies ‘R’ Good Enough” (The Goonies)
Why was Captain Lou in this music video?

8. Simple Minds – “Don’t You Forget About Me” (Breakfast Club)
The one song from the 80s that everyone knows what movie it’s from.

10. The English Beat – “March of the Swivelheads” (Ferris Bueller’s Day Off)
People might not know the name of the song, but they will know it when they hear it. This is the song during the scene when Ferris is running home.

11. Oingo Boingo – “Weird Science” (Weird Science)
The theme song to one of my favorite 80s movies. “YOU REALIZE IT’S SNOWING IN MY ROOM GODDAMNIT?”

14. The Jam – “A Town Called Malice” (National Lampoon’s European Vacation)
Great song, great band. This song was heard when the Griswolds were driving around London and saw some punkers walking on the street.

16. Stan Bush – “The Touch” (Transformers)
I remember seeing Transformers in the movie theater when I was little and I always loved this hair metal soundtrack from Stan Bush. You GOT THE TOUCH!

17. Guns N Roses – “Welcome to the Jungle” (The Dead Pool)
Anyone remember Jim Carrey as some rocker lip syncing to this song?

19. John Cafferty & The Beaver Brown Band – “On the Dark Side” (Eddie and the Cruisers)
I barely remember this movie but the song is very memorable.

23. Madonna – “Who’s That Girl” (Who’s that Girl)
Gotta have a Madonna song on an 80s soundtrack playlist.

24. Michael Sembello – “Maniac” (Flashdance)
I saw never saw Flashdance but the soundtrack has a lot of classic songs.

26. Bananarama – “Cruel Summer” (Karate Kid)
I don’t believe this was on the soundtrack but I’m pretty certain it was played when he was on a date with Elisabeth Shue.

27. General Public – “Tenderness” (Weird Science)
When was this song played? When Gary kisses that chick? I’ve seen so many different versions of the movie and the songs always change. This was one of the worst movies that got censored for basic TV.

30. Dream Academy – “Please Please Please Let Me Get What I Want” (Ferris Bueller’s Day Off)
The Smiths original song is fantastic, but so is this instrumental cover. Honestly, I knew about this version before the Smiths since I only got into the Smiths 10 years ago.

31. Bill Medley and Jennifer Warnes – “(I’ve Had) The Time of my Life” (Dirty Dancing)
Can’t stand this song but its in a 80s movie that people love.

32. Don Henley – “All She Wants to Do Is Dance” (Real Genius)
I told you Real Genius has some great music in it!

33. Glen Fry – “The Heat Is On” (Beverly Hills Cop)
Beverly Hills Cop was supposedly one of the first soundtracks to have pop and current hits on a soundtrack. There’s certainly a lot of cool songs on it, like this one!

37. Journey – “Any Way You Want It” (Caddyshack)
Crank up some Journey on the golf course and dance!

38. Extreme – “Play With Me” (Bill and Ted’s Excellent Adventure)
Bill & Ted’s soundtrack has an excellent mix of heavy metal and hard rock songs. “Play With Me” features an insane guitar solo too!

39. Queen – “Princes of the Universe” (Highlander)
Besides Flash Gordon, Queen also did songs for Highlander as well. “Bring on the girls” line always crack me up.

40. The Call – “The Walls Come Down” (Real Genius)
The singer of this band just passed away. Unfortunately, this is the only song I know from The Call.

41. Oingo Boingo – “Dead Man’s Party” (Back to School)
Danny Elfman and Oingo Boingo made an appearance during Thornton Melon’s party…And Robert Downey, Jr. was making fart noises during it.

42. Kenny Loggins – “Danger Zone” (Top Gun)
I don’t know which song is more popular, Danger Zone or Footloose. Both are huge hits that’s for sure.

45. The System – “Coming to America” (Coming To America)
“The royal penis is clean…”

48. James Brown – “Living in America” (Rocky IV)
It just goes to show you, if you’re gloat and put on a show. You’ll get your ass killed by a giant Russian boxer.

51. R.E.M. – “It’s the End of the World as We Know It (And I Feel Fine)” (Dream A Little Dream)
Never saw this one but I guess REM have a song on the soundtrack. Is this the one where Corey Feldman dresses up like Michael Jackson or was that most of the 80’s and 90’s?

52. Kenny Loggins – “I’m Free (Heaven Helps The Man)” (Footloose)
Told you Kenny was gonna on this list a lot.

55. Ice-T – “Reckless” (Breakin’)
I loved Breakin’ when it came out. I was so into break dancin’ I had the “official break dancin’ board” that I bought at a store. Yes I’m not making that up. Ice-T’s song Reckless was always a favorite when watching the movie and listening to the music.

56. Billy Ocean – “Get Outta My Dreams, Get Into My Car” (License To Drive)
Crank this song and just maybe, Heather Graham will want you too.

58. Eric Carmen – “Hungry Eyes” (Dirty Dancing)
Dirty Dancing could very well be one of the most popular soundtracks of the 80s…among women.

59. The Beach Boys – “Kokomo” (Cocktail)
Rock out like John Stamos on the bongos.

61. DeBarge – “Rhythm of the Night” (The Last Dragon)
Believe it or not, I like this song a lot haha.

62. Al Jarreau – “Girls Know How” (Night Shift)
This song is hard to find but I love this Al Jarreau song from Night Shift starring The Fonz and Michael Keaton.

66. Queen – “One Vision” (Iron Eagle)
I had no idea Queen’s “One Vision” was used for Iron Eagle. Maybe I just forget, it’s been about 15 years since I last saw it.

68. Randy Newman – “I Love LA” (Naked Gun)
This song was great during the baseball game montage for Naked Gun. I believe this was also in Escape To LA as well.

69. Patti LaBelle – “Stir It Up” (Beverly Hills Cop)
This isn’t a Bob Marley cover but fun song from Patti LaBelle.

70. Cara – “Flashdance…What A Feeling” (Flashdance)
Don’t know much about Flashdance, or this song. It’s not something I listen to normally.

71. Bonnie Tyler – “Holding Out For A Hero” (Footloose)
I always remembered this song for Days Of Our Lives (don’t ask) but it was played during a tractor chicken race…or something.

74. Busboys – “The Boys Are Back in Town” (48 Hours)
“The Bus Boys will fuck anything that move. Come over to my house the fish stop swimming…”

75. Plastic Bertrand – “Ca plane pour moi” (European Vacation)
Lou Deprijck and Plastic Bertrand did this song that’s similar to “Jey Boy Jet Girl.” Can’t figure out who wrote the song first, or who’s ripping off who. In any event, I like the French version better.

78. Black Flag – “TV Party” (Repo Man)
Haven’t had a chance to see Repo Man yet but apparently Black Flag’s classic “TV Party” was in it or on the soundtrack.

79. Angel & The Reruns – “Why Do Good Girls Like Bad Boys” (Bachelor Party)
I always thought this band was fake in the movie. Guess not.

80. Oingo Boingo – “Who Do You Want To Be” (Bachelor Party)
A ska-ish song from Oingo Boingo. You can heard this one during the bachelor party.

81. Stephanie Mills – “Bit By Bit” (Fletch)
Get your roller skates, skate on the California boardwalks and jam out to the theme to Fletch.

82. Howard Jones – “Like To Get To Know You Well” (Better Off Dead)
Howard Jones is the perfect 80s montage music.

83. Iggy Pop – “Real Wild Child” (Crocodile Dundee II)
Can’t remember when this song was played, was it when Dundee was trying to rescue Sue in that mansion?

84. Vital Signs – “The Boys and the Girls Are Doing It” (Bill and Ted’s Excellent Adventure)
Napoleon sure loves Waterloo!

86. INXS – “Good Times” (Lost Boys)
INXS was a band I didn’t really like back in the 80s but have grown to like them a lot over the years.

88. Eurythmics – “Would I Lie To You” (One Crazy Summer)
I’m surprised Eurythmics didn’t get put on this playlist more.

91. The Papers – “I’m Ready To Fly (Kangaroo Hop)” (BMX Bandits)
Remember BMX Bandits? No!? It was one of the first films that starred Nicole Kidman! She, along with PJ and Goose are a bunch of BMXers on the run from bank robbers. It’s a brilliant movie! No..not really.

96. Stephen Bishop – “The Heart Is So Willing” (The Money Pit)
Stephen Bishop is the guy who sings that cheesy folk song in Animal House. Thankfully this song from the Tom Hanks movie Money Pit is a lot better.

98. ‘Weird Al’ Yankovic – “Dare to be Stupid” (Transformers)
Devo spoofing song that is randomly used in the Transformers movie.

99. The Rubinoos – “Revenge of the Nerds” (Revenge of The Nerds)
The nerdy rock theme song. NERDS!

100. Steve Winwood – “Higher Love” (Stakeout)
I don’t recall what scene this song was in but I always like listening to Steve Winwood’s stuff.

101. Talking Heads – “Burning Down the House” (Revenge of the Nerds)
Our house, our house is burning down…

102. Billy Ocean – “When the Going Gets Tough, the Tough Get Going” (Jewel of The Nile)
This sequel stinks but not this Billy Ocean song that was written for the movie.

103. Nick Rivers – “Skeet Surfing” (Top Secret)
Top Secret is very underrated and just a hilarious movie. Case in point, this Beach Boys spoof in the beginning of the movie.

104. Duran Duran – “A View To A Kill” (A View To A Kill)
Even if you didn’t know this was for a James Bond movie, this song still has that vibe about it.

105. John Fogerty – “Centerfield” (Bull Durham)
This was a classic scene where some baseball players were running the bases at night when the sprinklers were on.

107. Starship – “Nothing’s Gonna Stop Us Now” (Mannequin)
The guy fell in love with a Mannequin. That’s a little sad.

110. Stan Bush – “Dare” (Transformers)
Besides “The Touch,” this is the other song I love from the Transformers movie.

113. Kenny Loggins – “I’m Alright” (Caddyshack)
Get down and boogie like a gopher! 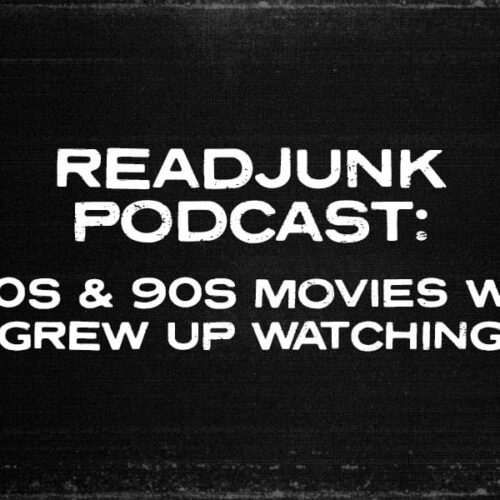