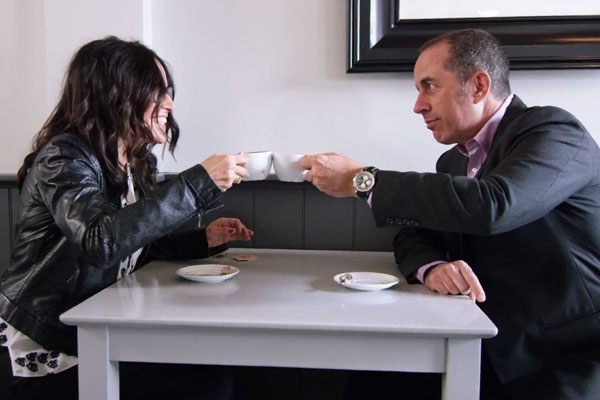 Jerry Seinfeld’s Comedians in Cars Getting Coffee will be moving it’s “airtime” each week to 11:30pm at night, starting June 3rd when the 6th season premieres. Julia Louis-Dreyfus will be the first guest, and then Bill Maher, Trevor Noah, Jim Carrey, Stephen Colbert and Steve Harvey will be appearing the web series as well. You can watch the trailer below.

The two-time Emmy® nominated series “Comedians in Cars Getting Coffee,” starring and executive produced by Jerry Seinfeld, is returning to television streaming network Crackle on June 3 for its buzzed about sixth season. The original unscripted series will enter new territory as the first streaming program to compete with the coveted late night slate, airing brand new episodes every Wednesday at 11:30pm EST. Jerry is switching roles from a regular guest on the late night scene, to the one putting his friends in the hot seat during the popular time frame. The just released trailer showcasing the star-studded guests can be viewed HERE along with the poster HERE.

“Comedians in Cars Getting Coffee” is the only show of its kind to go head to head with late night programs. With Crackle’s new, revolutionary “ALWAYS ON” experience, powered by Adobe Primetime, as soon as viewers launch Crackle, a scheduled program will begin playing, allowing consumers to browse the newly created channel guide while continuing to watch what’s already on. “ALWAYS ON” will roll out exclusively on the Roku platform end of May prior to the “Comedians” premiere, and a variety of other platforms (tba) in August.

The upcoming season of “Comedians in Cars Getting Coffee” on Crackle will feature a slew of special guest stars including Julia Louis-Dreyfus (“Veep”) in the first episode, Bill Maher (“Real Time with Bill Maher”), Steve Harvey (“The Steve Harvey Show”), Stephen Colbert (“The Colbert Report”), Trevor Noah (“The Daily Show”) and Jim Carrey (DUMB AND DUMBER TO).  The series is executive produced by Embassy Row.