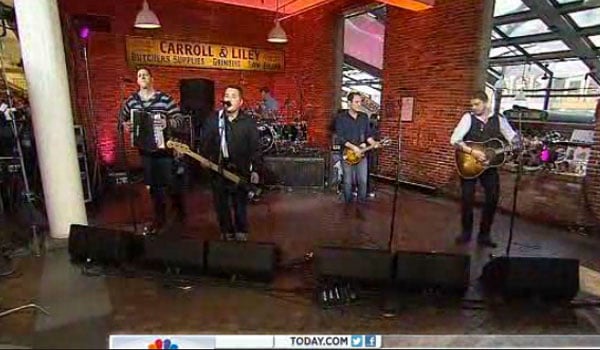 You know a band has really made it when they are playing for Matt Lauer and [insert female host that Matt Lauer probably can’t stand] for The Today Show. The Today Show was in Boston so the Dropkick Murphys were serving as the theme music throughout the show. Towards the end of the show, they played “Rose Tattoo” and got interviewed. Raise your hand if you were nervous Ken Casey was gonna curse on live TV?

Visit NBCNews.com for breaking news, world news, and news about the economy

The band’s latest release, SIGNED and SEALED in BLOOD (Born & Bred Records/ADA), debuted at #9 on Billboard’s Top 200 upon its release earlier this year, and received overwhelming critical acclaim from Rolling Stone, NPR, USA Today, Stereogum, and more. In addition to an upcoming U.S. tour, Dropkick Murphys will appear on Conan on April 11, just prior to performing at this year’s Coachella.

The 2013 “St. Patrick’s Day Tour” begins on February 21 in Cleveland, OH and concludes with three dates in their hometown of Boston, MA including the fulfillment of the band’s career-long dream of headlining the Boston Garden, now known as TD Garden on March 15. The Garden show will be billed as “Dropkick Murphys Irish Festival,” with bands and attractions on two stages. The entire tour will have an epic finale on St. Patrick’s Day (March 17) at The House of Blues on Boston’s famed Lansdowne Street.