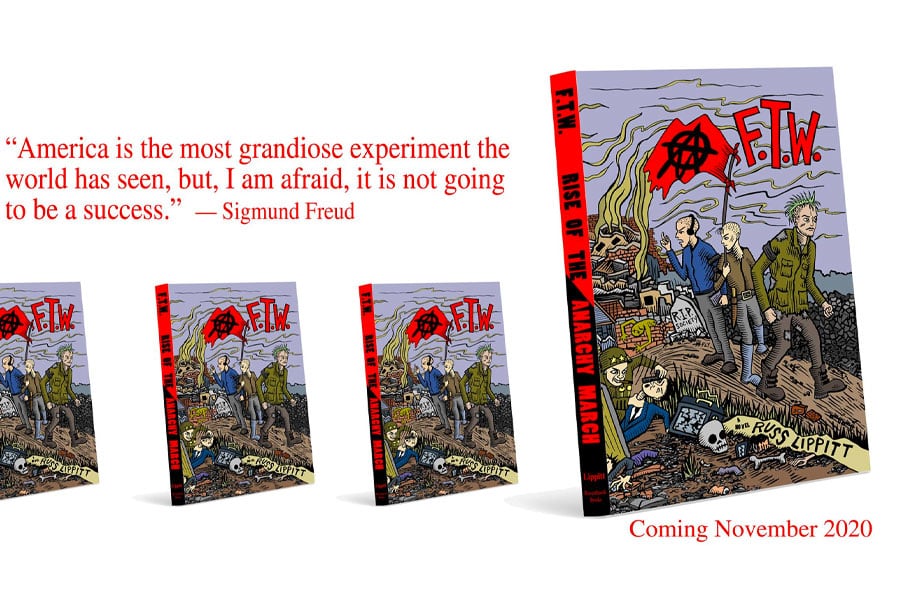 Read the press release below:

“Seattle, Minneapolis, Portland, the list of cities rebelling, rejecting our current system of government and social order is growing, and the oppressed, the long-ignored, are now rising up,” claims Russ Lippitt, author of the soon-to-be-released novel F.T.W.: Rise of the Anarchy March. “A ‘new’ normal? Get used to it. The reality is there is no such thing as ‘normal.’ It’s an illusion.” Rising authoritarianism, the cratering of the US economy, and geopolitical instabilities, Lippitt proposes a way out. By showing us what will happen if we decide “to continue on a road that is futureless,” and placing Anarchy in a fictional space, he makes an often-misunderstood philosophy more plausible.

F.T.W. dives deep into the bleak and post-apocalyptic nation once known as the United States of America. When the ideals of, “Life, liberty, and the pursuit of happiness” were taken for granted, those same rights were denied. In the near future, the republic has been torn apart into sovereign countries by politics, greed, and religion. The horrors that ensued from decades of raging wars between the upper and lower classes gives rise to a punk brigade known as the Anarchy March. They fight to overturn their corrupt government’s tyranny on humanity and to save the world from the status quo.

Lippitt scoffs at the comparisons of his revolutionary and quite disturbing predictive tome, and the “Punks” who lead it, to Orwell’s 1984 and Huxley’s Brave New World. “They missed the mark by decades and were wrong about the people who would lead the charge!” Does F.T.W. try to solve some of life’s most complex and looming questions. “No,” says Lippitt, but rather, “It’s a warning shot, decrying the savageness when all seems lost.” The expeditions of the Anarchy March shine a spotlight on unfettered religion, war, and politics in order to understand and co-exist with one another amidst diverse philosophies.

“In the spirits of The Outsiders and Jack Kerouac’s On the Road, I raise my gin and tonic high in author Russ Lippitt’s honor!”
— Outsight Radio (review for Lion’s Share)

Russ Lippitt lives in Los Angeles, CA. He is the Anarchologist of our time; the author of the critically acclaimed Lion’s Share, a sought-after counterculture featured columnist, and has several script and film projects in the works. Lippitt is the articulate voice of the younger generation of punks and societal rebels who believe they have been betrayed by the “promise” of America.