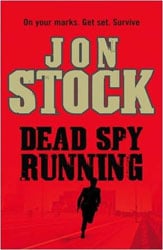 Stephen Gaghan (Traffic, Syriana) is adapting the screenplay for the spy novel “Dead Spy Running.” McG is set to direct the spy movie for Warner Bros. “Dead Spy Running” was written by British author Jon Stock and it’s suppose to be like the Bourne movies. Hey, if it’s anything like those movies I’ll definitely be interested in this. No word on any actors attached to the film yet.


Based on a book by British author Jon Stock, the film is meant to be the first in a trilogy and aims to reinvent the spy genre by telling the origin story of a newly trained spy in a tone that mixes the grittiness of “The Bourne Identity” with the wittiness of John Le Carre’s oeuvre.

“Spy,” to be published in June, begins with the protagonist running the London Marathon, where a fellow racer is strapped with explosives. The scenario leads to a globe-trotting adventure to clear the name of the man’s father.

McG, who would direct at least the first installment, is producing with Jeanne Allgood via their Warners-based Wonderland Sound and Vision.
[Hollywood Reporter]