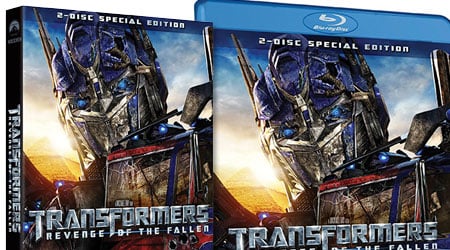 One of the year’s biggest movies and biggest disappointments is quickly coming to DVD and Blu-Ray! Now everyone can fast forward the scenes whenever “the Twins” are on the screen. Maybe the bonus features include an option of removing those racist annoying characters completely from the movie? The movie will be out on DVD and Blu-Ray on October 20th from Paramount/Dreamworks.

DreamWorks Pictures and Paramount Pictures’ $820+ Million Global Smash Returns to Earth October 20 Armed with Explosive Special Features to Bring the Epic Battle Home in Two-Disc Blu-ray and DVD Sets
HOLLYWOOD, Calif. – With more action and more thrills, TRANSFORMERS: Revenge of the Fallen captivated audiences to earn over $820 million at the box office and become the #1 movie of the year in North America and throughout the world. The latest spectacular adventure in the wildly popular TRANSFORMERS franchise will make its highly-anticipated DVD and Blu-ray debut on October 20, 2009 in immersive, two-disc Special Editions, as well as on a single disc DVD, from DreamWorks Pictures and Paramount Pictures in association with Hasbro; distributed by Paramount Home Entertainment. The eagerly-awaited home entertainment premiere will be accompanied by one of the division’s biggest marketing campaigns ever, generating awareness and excitement of galactic proportions.

From director Michael Bay and executive producer Steven Spielberg, in association with Hasbro, TRANSFORMERS: Revenge of the Fallen delivers non-stop action and fun in an all-new adventure that the whole family can enjoy. Featuring out-of-this-world heroes in the form of the mighty AUTOBOTS and a malevolent and powerful villain known as THE FALLEN, the film boasts some of the most sensational—and complex—visual effects in film history set against the backdrop of spectacular locations around the world. In addition to audience favorites OPTIMUS PRIME and BUMBLEBEE, the film’s human stars have returned to help save the world including Shia LaBeouf (Indiana Jones and the Kingdom of the Crystal Skull), Megan Fox (How to Lose Friends & Alienate People), Josh Duhamel (“Las Vegas”), Tyrese Gibson (Four Brothers) and John Turturro (The Good Shepherd).

The TRANSFORMERS: Revenge of the Fallen two-disc Blu-ray and DVD feature over three hours of in-depth, immersive special features that let viewers further explore the world of the legendary ROBOTS IN DISGUISE. Among the engrossing content is a multi-chapter documentary, including interviews with the cast and crew, that chronicles the entire making of the film from development and design to filming in locations around the globe, working with the U.S. military, creating the groundbreaking visual effects and putting it all together to produce the biggest film of the year. The discs also include an all-access featurette following renowned director Michael Bay through an entire day, a comprehensive exploration of the “confidential files” on a dozen of the TRANSFORMERS characters featured in the film, multi-angle breakdowns of some of the most sensational action sequences and much, much more.

The Blu-ray and two-disc DVD packages also will feature augmented reality technology that will allow owners to interact with a holographic image of OPTIMUS PRIME utilizing their webcams and a special website. Fans will be asked to piece together the Matrix of Leadership to bring OPTIMUS PRIME back to life, help repair his armor and calibrate his weapons by actually controlling his aim during target practice.

As an added bonus, the Blu-ray will include an exclusive interactive feature that gives viewers the ability to customize their own robot characters and get a glimpse at a rogue robot. Out of all the available permutations, one will unlock an exclusive interview with Michael Bay about his plans for the next adventure.

Disc 2:
• The Human Factor: Exacting Revenge of the Fallen—This multi-chapter documentary chronicles the entire creation of the film and includes interviews with the cast and crew:
o Seeds of Vengeance – Development and Design – After the overwhelming success of 2007’s Transformers, how do the filmmakers top themselves for the sequel?
o Domestic Destruction – Production: United States – Michael Bay believes in going big: Big action and big explosions. Cast and crew are pushed to the limit as they traverse the U.S. from New Mexico to Pennsylvania.
o Joint Operations – Production: Military – No other filmmaker in the world enjoys the kind of military access and cooperation Michael Bay has. Here we see just how efficient our armed forces are and the awe and respect shown by the cast.
o Wonders of the World – Production: Middle East – You can’t really reproduce Egypt anywhere but Egypt so off we go to Giza and Luxor.
o Start Making Sense – Editing – In order to turn over the massive amount of film as quickly as possible to VFX, four editors work tirelessly in a unique tag-team approach to shape the film.
o Under the Gun – Visual Effects – Revenge of the Fallen features the most complicated VFX in film history. So complicated in fact that the filmmakers were unsure they would make the deadline. The DEVASTATOR VFX alone required 83% of ILM’s total render farm capacity.
o Running the Gauntlet – Post-Production and Release – Working seven days a week, Michael Bay and company usher the film through sound design, Digital Intermediate color-timing and a globe-trotting whirlwind of premieres.

• A Day with Bay: Tokyo—An intimate and fun all-access journey with Michael Bay as he travels to Tokyo, Japan tor the world premiere of the biggest film of the year.
• 25 Years of TRANSFORMERS—Access an all-new featurette celebrating a monumental milestone for one of Hasbro’s most successful and popular franchises.
• NEST: Transformer Data-Hub—Explore conceptual artwork created by the production for 12 of the most popular AUTOBOTS and DECEPTICONS from the film.
• Deconstructing Visual Bayhem with Commentary by Pre-Vis Supervisor Steve Yamamoto— A series of multi-angle pre-visualization sequences allowing viewers to learn how some of the film’s most spectacular scenes were created with an introduction by Michael Bay.
• Extended Scenes
• Music Video: Linkin Park’s “New Divide”

BLU-RAY EXCLUSIVE:
• The ALLSPARK Experiment—Viewers get their chance to unleash the power of the recently recovered ALLSPARK shard on Earth vehicles. Begin by selecting and customizing a vehicle with a selection of parts and accessories. Then apply the ALLSPARK to this creation and watch what happens. Applying the ALLSPARK to certain custom combinations enables four new robot characters with special powers. If viewers discover all four, they unlock a fifth vehicle, which reveals a top secret message about the future of the TRANSFORMERS movie franchise.
• NEST: Transformer Data-Hub—A database of some of the TRANSFORMERS characters that appear in the new film, offering users access to each robot’s confidential file including:
o Innovative 3D spin galleries of each robot
o A timeline for each TRANSFORMERS character charting its origins, back story and design evolution from toys to animated series to comics and finally feature films
• Giant Effing Movie – A very personal look at the making of the movie.
• The Matrix of Marketing—An archive of the film’s promotional media including trailers, posters and television spots.

A Message for All Mankind
The TRANSFORMERS: Revenge of the Fallen Blu-ray and DVD debut will be supported by one of the largest marketing and promotional campaigns in Paramount Home Entertainment’s history. In addition to a multi-million dollar advertising blitz spanning television, print, radio and online, a stellar array of partners has joined forces with the studio to ensure that the AUTOBOTS’ message is transmitted to all of the Earth’s inhabitants.

Chevrolet returns as a partner with an awesome sweepstakes offering participants the chance to win a dream garage. The winner will select two Chevy vehicles of their choice from the most diverse line-up on the planet, including the coveted Camaro, the all new Equinox, the critically acclaimed Malibu, the legendary Silverado and others. A huge online campaign will drive consumers to TransformYourGarage.com to enter to win. Papa John’s will launch a massive national promotion in over 2,500 locations and featuring a multi-million dollar national television campaign promoting a $3.00 coupon for the DVD and Blu-ray. Papa John’s will also produce over two million limited edition TRANSFORMERS-themed pizza boxes and promote the offer and DVD release on 25 million pieces of direct mail and over 250 million online impressions. Land O’Frost will feature a $3.00 DVD rebate inside five million packages of One Pound Premium® deli pouch lunch meats. The promotion will be executed across nearly 20,000 supermarkets. Perdue will feature a promotion on 2.5 million packages of PERDUE® Refrigerated Breaded Chicken products featuring a $5 DVD rebate that will be promoted through a full-page free-standing insert ad and in-store POP.

Synopsis:
The battle for Earth continues in this action-packed blockbuster from director Michael Bay and executive producer Steven Spielberg. When college-bound Sam Witwicky (Shia LaBeouf) learns the truth about the ancient origins of the TRANSFORMERS robots, he must accept his destiny and join OPTIMUS PRIME and BUMBLEBEE in their epic battle against the DECEPTICONS, who have returned stronger than ever with a plan to destroy our world.