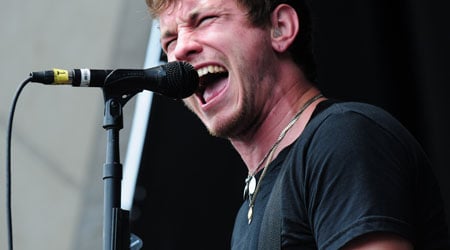 Against Me! is releasing their next album on Fat Wreck Chords. On July 7th, Fat Wreck and Against Me! will release “The Original Cowboy,” which is never-before-heard demos that were recorded in Gainesville, Florida. Fans of the band will definitely want to get this release from the band. Demos or not, the way that Fat released the Me First and the Gimme Gimmes B-sides and demos, I’m sure the album will be top notch.

Here’s what Fat Wreck Chords had to say:

It’s not even April Fool’s this time! Yep, you heard right, we are proud to announce that on July 7th, 2009 Fat Wreck Chords will be releasing The Original Cowboy by Against Me!.

These predominantly never-before-heard demos were recorded at Goldentone Studio in Gainesville, FL with Rob McGregor on July 15th, 2003. The session was scheduled prior to Against Me!’s trip to Memphis’ Ardent Studios where As The Eternal Cowboy was recorded (the band’s first release with Fat).

Tom Gabel explains the decision to go to Ardent: “Having already recorded our first full length album and two previous EPs with Rob at
Goldentone, we wanted to do something different for our second full length. We specifically wanted to make an all analog recording with as few overdubs as possible which is what we could do at Ardent. With Rob McGregor coming along to produce, we wanted to make sure he was familiar with the songs, so we made this demo recording.”
[Fat Wreck]