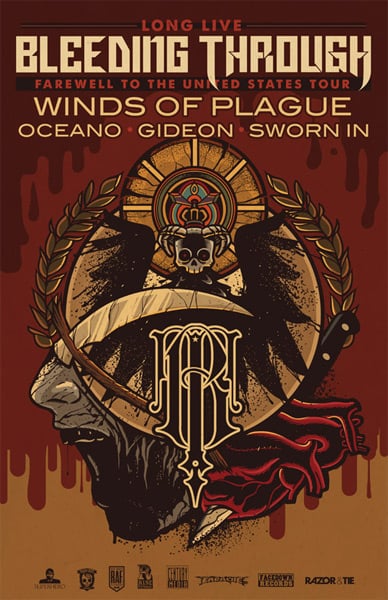 Bleeding Through played some shows in Australia and in Europe, and are going to finish up the band’s final run in November. “Love Live Bleeding Through/Farewell to the United States Tour” will feature support from Winds Of Plague, Oceano, Gideon and Sworn In. The closet the tour comes to NYC is in Sayreville, NJ at Starland Ballroom.


Bleeding Through has sold well over a half million albums worldwide, including the genre-defining This is Love, This is Murderous which sold 150,000 copies in the U.S. alone as the band helped raise the NWOAHM to prominence on Ozzfest, Warped Tour and abroad. Their followup album, The Truth, cracked the Billboard Top 50 with a 17,000 first week in 2006 and was #1 on Billboard’s Independent Charts. The Truth was produced by Rob Caggiano (then lead guitarist for Anthrax, now in Volbeat) and went on to sell over 100,000 copies in the U.S. as well.

Amidst label drama that would have killed most bands, Bleeding Through self-funded the recording of Declaration, an angry rebuke to the increasingly polished sounds of their contemporaries, produced by Devin Townsend of Strapping Young Lad. Eventually the label was able to cough up resources, but soft promotional efforts, continued nonpayment of royalties and the label’s eventual bankruptcy came next.

Bleeding Through’s very strong international label partners included Roadrunner and later Nuclear Blast. The band did a North American deal with powerhouse indie Rise Records once free from their former label home as a veteran/legacy act joining a roster full of younger up-and-comers. The result was the 2010 self-titled album released by Rise in the U.S. and Roadrunner internationally. The record was produced by Zeuss (Hatebreed, Municipal Waste, Acacia Strain) and featured cover artwork by Grammy nominated artist Ryan Clark of Demon Hunter.

The band released one more album with Rise Records in 2012, The Great Fire. Bleeding Through announced plans to disband in January, 2013. The group’s final lineup is comprised of founding member Brandan Schieppati (ex-Eighteen Visions) on vocals, Dave Nassie (ex-No Use For A Name) on lead guitar since 2009, Brian Leppke on rhythm guitar, Derek Youngsma on drums since 2001, Ryan Wombacher on bass since 2002 and Marta Demmel (formerly Peterson) on keyboards since 2003. Co-founder Scott Danough, who left in 2007, has joined them on tour all year. The band took onetime touring guitarist Patrick Judge (Demon Hunter) to Australia and were also rejoined for a few songs by Jona Weinhofen (I Killed The Prom Queen, ex-Bleeding Through, ex-Bring Me The Horizon) while Down Under for their last shows in Oz.

Since 1999, Bleeding Through has toured the world with Slayer, Marilyn Manson, AFI, Senses Fail, Cradle Of Filth, As I Lay Dying, Ozzfest (twice), Warped Tour, Bullet For My Valentine, Unearth, Demon Hunter and several other acts, as well as MTV’s “Headbanger’s Ball: The Tour.” They’ve graced the covers of Metal Edge, Chord, Under The Volcano and other magazines, with Marta appearing on Revolver’s cover twice. Kerrang!, Rocksound, Alternative Press and other genre tastemakers gave them many positive reviews. They took bands like Every Time I Die, Between The Buried and Me, Born Of Osiris, For Today, The Acacia Strain, The Ghost Inside and letlive. as opening acts.

Marta met her future husband, Machine Head lead guitarist Phil Demmel, as Bleeding Through toured Europe, Australia and Japan with Machine Head and Hatebreed in early 2010. The pair will celebrate their first wedding anniversary next month.

Bleeding Through plans to hit South America in early 2014 and will conclude their career with a string of West Coast shows. 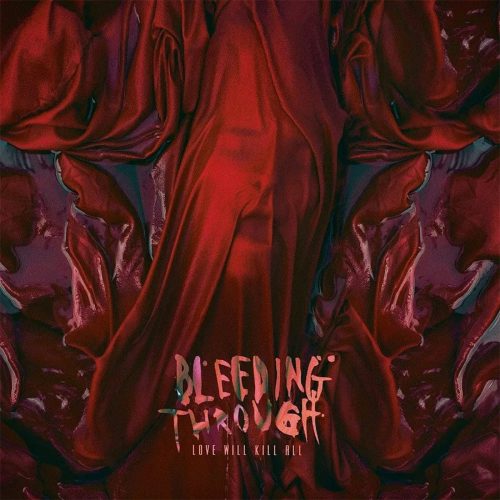 Bleeding Through – “Love Will Kill All”

Bleeding Through announce new album and The Spring Breakdown Tour: 2010

Bleeding Through touring with Machine Head in Europe

Bleeding Through touring with Satyricon this Fall