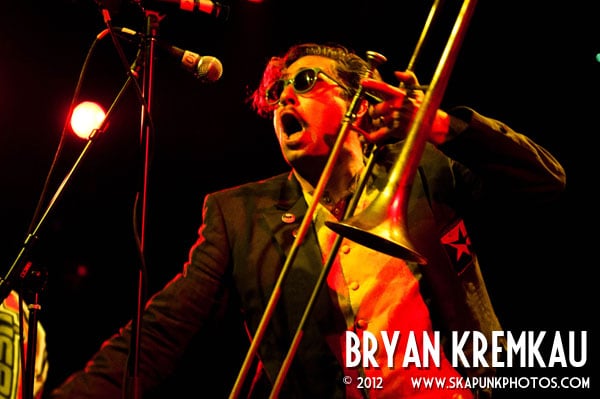 Trombone player Dan Regan is retiring from Reel Big Fish after playing with the band for over 20 years. Dan wants to stay close to home and be with his family, but also concentrate on his brand new brewery called Liberation Brewing Co.. After 20 years in a ska band, can’t imagine being more qualified to a run a brewery! We wish Dan all the luck and be sure to like his Brewery on Facebook. Read the statement from RBF and Dan below.

We’ve got some sad news everybody, Dan Regan, our trombone player for nearly 20 years has decided to retire from Reel Big Fish. The grueling, non-stop touring
lifestyle has been keeping him away from his wife and 2 babies too much and he wants to be home so he can concentrate on being a good dad (which is hard to do when
you’re out of town 300 days a year).

He’s also been rocking the trombone in this band since he was 16 years old (over half of his life!) and he’s decided he wants to make a change and pursue his dream of opening a brewery (ya gotta respect a man for wanting to make beer!). We are gonna miss the hell out of Dan, we’ve been doing this together a long time and we’ve been through so much together in the last 20 years. We are truly sad to see him go but we totally understand why he wants to leave and we wish him all the best in his new life out there in the real world (instead of the REEL world). Here is a message from Dan he wrote especially for all the RBF fans
out there:

Reel Big Dan Regan, here. Sad news, friends: I am retiring from Reel Big Fish. It’s been nearly 20 glorious, action packed years, with all of you. At this point in my story, I am needed at home. I have two kids who deserve to have a father around. While I’ve enjoyed watching you kids grow up (and keeping you older kids young), I feel that the best thing for me, right now is to jump off the road and get a job at home. I just miss my children too much, when I’m gone.

The Reel Big Fish guys, because they’re the best ever, have generously told me that I’m welcome back, any time. So don’t count me completely out. I may see you all yet again; especially at local LA/OC shows.This has been a great adventure and I couldn’t imagine spending it with better dudes. Aaron, Johnny, Ryland, Matt, Derek and the crew: Tom, Dave and Hoss – are some of the best friend I’ll ever know. Take care of them, for me. Show them you’re the craziest, most loving fans in the world. There’s lots more RBF touring in store: South America, North America, Australia, UK and Europe… it never ends. Go to these shows and rock out like maniacs. I want to hear your screams from all the way over here in Long Beach.Thanks so much for always bringing the party and treating this old trombone player like a rock star. From causing a riot at the Tower WOW record store, because we were just too handsome… to visiting nearly every brewery on planet earth, it’s been a wild ride.

I venture to Valhalla to feast with past members of RBF. We’ll link arms and sing the praises of our brothers still in the fray. By next year, I should have finished building a brewery. We’re calling her: Liberation Brewing Co. (LBC). If I cant tour and party with my friends, the next best thing would be to create a place and make them come to me. When you’re old enough, head to Long Beach for a pint and some tunes. I’ll be waiting with open arms. I love you all so much.

Keep dancing crazy, Be good to each other… and I’ll see you all in another life.