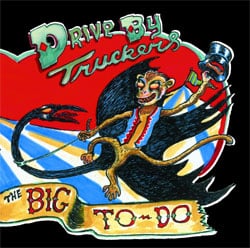 The Drive-By Truckers announced the first part of The Big To-Do tour, screenings of their documentary, The Secret To A Happy Ending, unveiled the album cover for The Big To-Do and offer free MP3. The Big To-Do is slated for release on March 16, 2010 on ATO Records. Leading up to the release the band will play some weekend runs before kicking off The Big To-Do tour with a two night stand in Atlanta and then heading to SXSW. More dates to be announced in the coming weeks.

DBT and ATO Records are offering up the first single, “This Fucking Job”, from The Big To-Do for free. Download it here.

The premiere screening of the DBT documentary, The Secret To A Happy Ending, is scheduled for February 5, 2010 at AFI Silver Theatre in Silver Spring, MD. This is a film about the redemptive power of rock-and-roll; it’s about the American South, where rock was born; it’s about a band straddling the borders of rock, punk and country; it’s about making art, making love and making a living; it’s about the Drive-By Truckers. Director Barr Weissman, Patterson Hood, Mike Cooley and Brad Morgan will be on hand for a Q&A after the screening.

This is the seventh DBT album that has featured original artwork by Wes Freed. The band has a very special relationship with Wes, they never tell him what to draw and often give him no input at all, yet he always seems to find some subtext, often one they didn’t know was there, that he brings out and runs with. That relationship has hit a new level on this album, as he basically illustrated every song. He honed in on the circus allusions of The Rock Show and how it all could be tied together in The Big To-Do. Look for more pieces to be unveiled in the weeks prior to release date.

The Secret To A Happy Ending screenings: