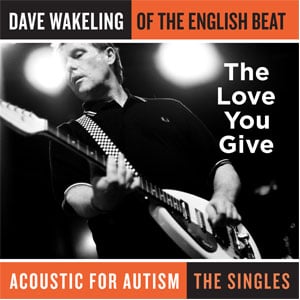 Dave Wakeling and English Beat have released a new single to benefit autism called “The Love You Give.” It’s an acoustic track and it’s a great one at that! What’s even cooler is the single’s artwork features a photo from yours truly. I even purchased the single on iTunes today to show my support for what Dave is doing. I hope you do the same! Buy the single here! The band will be playing Maxwells and Highline Ballroom this month and next, so be sure to get out to see English Beat and dance the cold off ya!


Well-known for his humanitarian efforts working for Greenpeace and being a co-founder of the “Smile Train” mission, Dave Wakeling of Two-Tone ska legends THE ENGLISH BEAT is once again putting the World in the forefront and supporting an issue that needs attention – autism. “My mom nursed autistic kids in the Sixties and Seventies and she told me fascinating stories,” he recalls, regarding his early exposure to the neurological disorder. “And now, I have a number of friends dealing with autism in their families as well.”

In an effort to raise awareness and funds for the care of autistic children, Dave is launching The Love You Give Tour this week on the East Coast with donations to be collected during the concerts. The tour launches on December 8th in Annapolis, MD and travels up the East Coast until mid-December (dates below). As an added incentive in these dire economic climate, the band has reduced ticket prices for select dates for the unemployed as a sign of solidarity and support – “a helping hand in these hard times” as Dave explains. Fans wanting to take advantage of this reduced admission will need to provide a current unemployment check stub as proof at the door.

In conjunction with this tour, Dave will be releasing the acoustic solo performance version of his new song “The Love You Give,” (his first studio recording since 1994) in association with Acoustic for Autism (http://acousticforautism.org/), an organization created to increase awareness, acceptance, understanding for those with autism and to help raise funds for organizations who are making a direct, positive impact for families and their children. “I am so astounded by Dave’s involvement and enthusiasm for this project,” says Acoustic For Autism (A4A) Executive Producer Mike Cusanelli. “It is amazing for me to be working closely with an artist that inspired me long before I ever dreamed I would work in the music business.” Adds A4A Founder/Producer Louis Gendron, “I had a list of artists I wanted to contact – artists I’ve respected my whole life. When I contacted Dave, I did not expect him to respond so quickly or directly.”

“The Love You Give” has been an audience favorite at recent concerts but has never been released commercially. Stripped down and intimate, Dave Wakeling’s solo acoustic version will be available digitally this week for $.99 on iTunes (a full band version will be available in 2011). This will mark the first recording that Dave has released since General Public unleashed its single “I’ll Take You There” which landed the #1 spot on Billboard’s Dance Chart.

“The sentiment of ‘The Love You Give’ as well as Dave’s desire to help us out means the world to me,” says Mike who, like Louis, has a child afflicted with autism. Louis adds, “My wife and I, like so many families, spend so much time and energy focused on helping our daughter get the best treatment she requires. Autism therapies are expensive and are incredibly time consuming for the children and their families. The financial and emotional strain is overwhelming. Part of the reason I started A4A was for parents to have something that can help them relax, while also letting them know they’re not alone. It means a lot to know there are other mothers and fathers going through the same struggles.”

“We are all in the same boat with this human experience,” explains Dave about the song. “The love you offer during your lifetime lasts forever in the help you’ve given to others.” Louis concludes, “I think the song says it all really. If we don’t love each other and take care of all of our children now, then what else is there?”