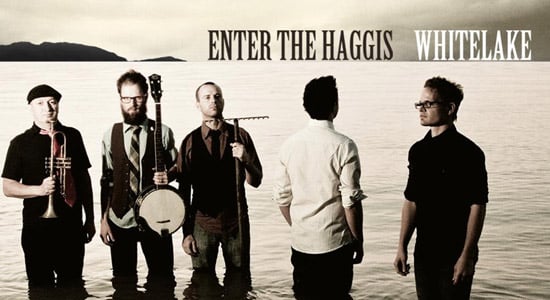 In 2011, Toronto roots-rock band Enter The Haggis retreated to a makeshift studio surrounded by Canada’s picturesque landscape, to immerse themselves in the writing and recording of their sixth studio album, Whitelake.

For singer-fiddler-keyboardist Brian Buchanan, the experience was quite literal. Tipping his canoe over a 1/2 mile from shore in the frigid waters of White Lake, he managed to swim to shore and walk the nearly 2 miles to the band’s cottage/studio.

“If I’d died, there’s no doubt it would havebeen called a suicide,” laughs Brian, tentatively. “I had just finished recording the vocals for a song called”The Flood”, which talks about life being out of control and water rising up around you.” (And maybe there’s still time/maybe we should find a tree to climb/ but it’s easy not to be afraid/ and simply close your eyes/ and just watch the water rise.)

Thankfully, he survived to tell the tale as the band releases its anticipated new album April 3 on Firebrand Entertainment.

Funded entirely through the generous contribution of loyal fans, Whitelake is the most heartfelt and lyrically honest material the band has written to date. And also provides the most musical depth.

The first track,”Headlights 1&2″, reflects on the possibility that each album could be the last: “It’s all or nothing, beginningor end…” While some stories behind the songs take on a more serious tone: “Devil’s Son” is about BernieMadoff’s son, Mark, who committed suicide; “The Whistleblower” is about an ex-child soldier returninghome.

Whitelake is the follow-up to 2008’s Gutter Anthems, which hit #2 on the iTunes World Music charts. The band has made several major television appearances including A&E’s Breakfast with the Arts and Live with Regis and Kelly;and their very own PBS special.

Following the 2012 Cayamo Cruise in February, Enter The Haggis performs in the U.S. through March and invites their fans to join them on their tour of Ireland, April 11-19 (details available online). The Washington Post of their live performances, “No one can anticipate the level of energy with which ETH throws down.”

For information on Enter The Haggis, visit: http://www.enterthehaggis.com

Next: The Skatalites announce new single, new album, and US/ Canada tour!