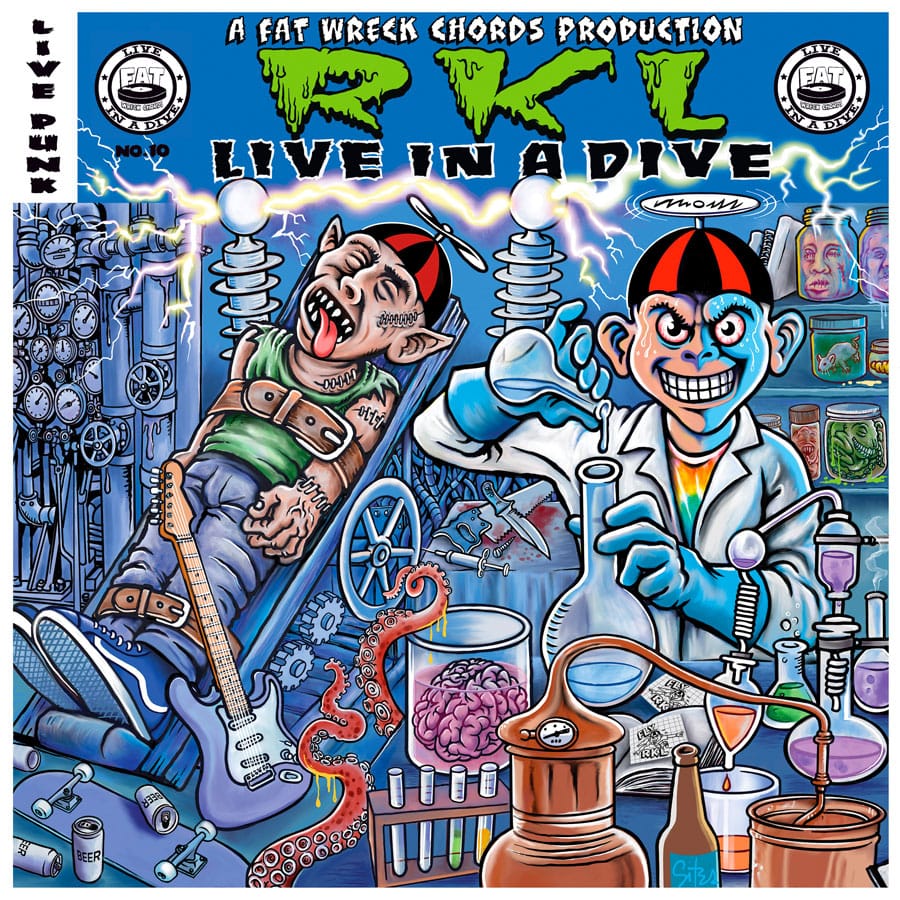 Fat Wreck Chords have announced the 10th installment in the “Live in a Dive” series for RKL (Rich Kids On LSD). You can listen to a single from the album called “Scab on My Brain.” The 17-song tracklist is mainly culled from their 1987 album Rock’ n Roll Nightmare, and was recorded at the famed Eindhoven squat-turned-venue De Efenaar. The album will be out June 3rd via Fat Wreck. You can pre-order the album now.

The tenth installment of Fat Wreck’s Live in a Dive series takes us back over 30 years to Eindhoven, Holland. The date is May 12, 1989, not too long before Montecito, CA punks RKL – aka Rich Kids On LSD – will call it quits (for the first time, anyway). In fact, at this point, the wheels are wobbly and are starting to fall off the band. Their time in Europe is surrounded by hash smoke, booze, drugs, and debauchery that is only exacerbated by their youthful, carefree abandon. Strain is also taking its toll from hard van touring, sleepless nights, heavy drinking, drug use, and tension that is beginning to form like barnacles on the RKL ship. Especially between vocalist Jason Sears & drummer Richard ‘Bomer’ Manzullo who are struggling with the direction of the band seven years into its career. Not that you can tell that from these songs. The 17-song set – a good chunk of which is culled from 1987’s album Rock ’n Roll Nightmare – was recorded at famed Eindhoven squat-turned-venue De Effenaar, and is beautifully ragged and raw. In fact, it sounds like the band members are having the time of their lives. Probably because, despite everything going on behind the scenes, when they were onstage they were having the time of their lives!

“This definitely brings back the excitement of those days,” says Joe Raposo, who joined the band as a bassist in 1987. “Even the rough times, which were harsh, were still exciting, I have to admit. Having to deal with the musical direction change that Bomer was adamant about was definitely a bummer, as we all loved the sound of Rock N Roll Nightmare and wanted to pursue that sound for new songs. Which I think is kinda ironic, because Bomer was the one that wrote most of all the music on that album! But that’s just how he was, always progressing. Dealing with the escalation of heavy drug use was not fun and taking a toll on the members not participating. But listening to this album also brings back all of the wonderful memories of the fun we had on the road, touring in a van with [Destiny Records founder] Dave Pollack. We were all really young and just living life and going for it. We were in our teens and early twenties, and we were literally having the best time of our lives together, you know? It was like live fast, die young, and leave a beautiful corpse!”

Although the band would get back together – twice! – after its initial break-up, things were never quite the same after the members went their separate ways the first time. As such, this record is a document of one of the last points before everything took a dive, of a band holding it together – incredibly well, it has to be said – before everything unraveled. And even though you can’t really hear that tension (“It was mostly in the background when we were on the road,” says Raposo, “but it became very evident when we were trying to write new songs”), when compared to the Double Live in Berlin live album, recorded the year before this one, there does seem to be an extra sense of urgency in these songs. They’re more primal and more ferocious, more intense and more nihilistic. Above all, though, they still sound fun as hell.

“I think we were all still just happy playing together,” says Raposo. “For the most part – I would say 95% of the time or even more than that – we were just having a blast playing every night together. And that was the most important thing. We were all on top of our game, Bomer was a fucking beast on the drums, and Jason was one of the best frontmen ever. He could get a crowd going, he could incite a riot, he could make everybody laugh, he could puke onstage at will!”

Even if there’s no puking at this gig, all of that is nevertheless clear, even 30-something years later and on record. But RKL’s Live in a Dive album – which features incredible art by longtime RKL cover artist Dan Sites – isn’t just a pure representation of the band in all its twisted, untamed glory. It’s not just the sound of a band about to fall off the cliff edge. It also serves as a bittersweet tribute to both Manzullo and Sears, who died in 2005 and 2006 respectively. These songs capture both members in their element – onstage, doing what they love, surrounded by people who love what they do. Just listen to the frantic run-through of “Break the Camel’s Back”, the guttural desperation of “Hangover”, the nervous energy of “Blocked Out”, the blistering frenzy of “Rock N Roll Nightmare”. It’s one of the last times – and certainly the last time caught on tape – that the band would sound this imperfectly perfect, this happily carefree.

“When the band got back together,” remembers Raposo, “drugs had taken a strong hold on some people, and at that point the addictions were just so bad that it couldn’t be resolved, not even with going to rehab or anything else like that. So that’s really sad. And then, of course, shortly after, death started occurring and that became the end of it. So what I really love about this record is that I can always play it and hear my friends playing, and me playing with my friends, hearing us all play together, and sharing that love on stage with one another. That’s the best thing ever. It’s a great memorial.