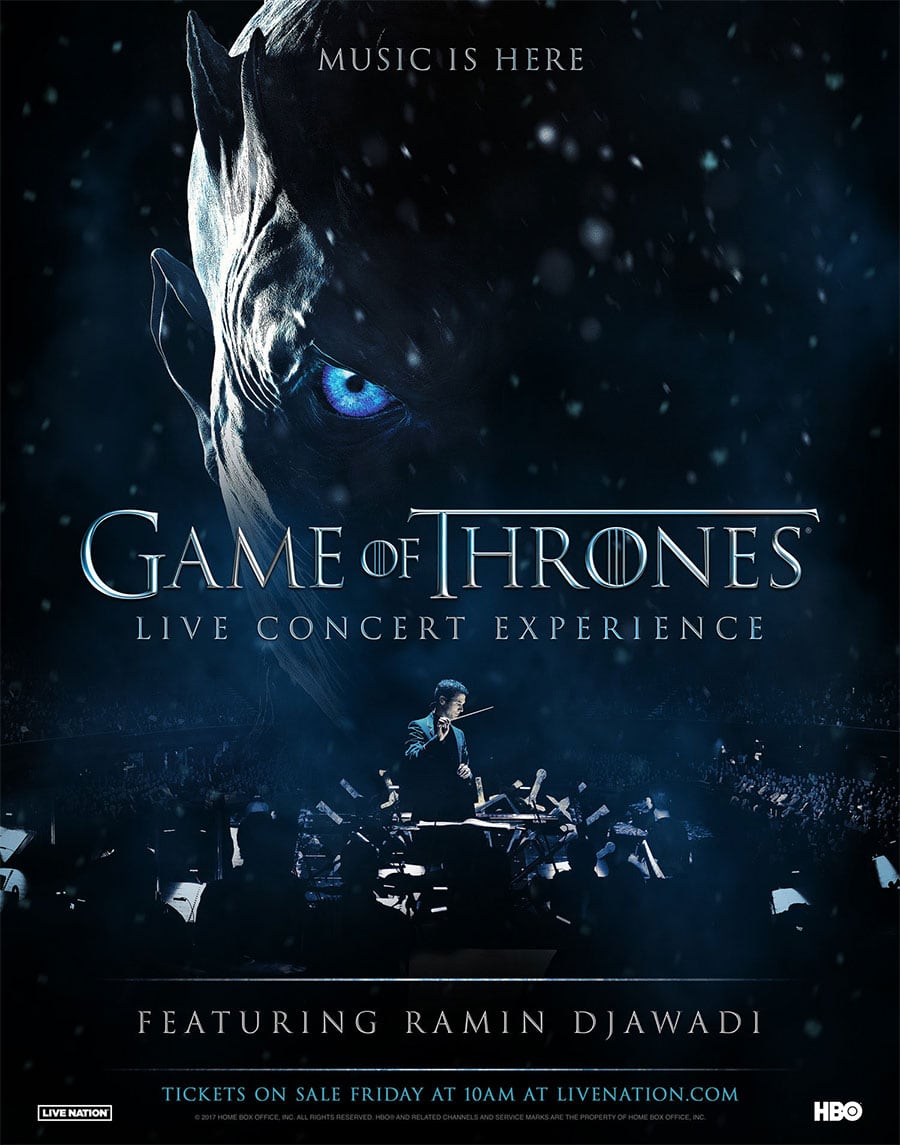 If you missed out on the Game Of Thrones Live Experience this year, you’ll be able to see it again in 2018! Want to know how it was, read our review from the MSG concert. The massive tour is probably a good placeholder since the show won’t be coming back until 2019. It’s an amazing experience if you love the show and the music by composer Ramin Djawadi. It will hit Europe starting in May and will be touring the US starting in September. on September 26th, it will stop at Prudential Center in Newark, NJ and on October 3rd, will stop at Madison Square Garden in NYC.

“Bringing the Game of Thrones Live Concert Experience to audiences earlier this year was a dream come true, dating back to an idea hatched over three years ago,” said Djawadi. “The scale and spectacle of the production brought the world of Westeros to life in a truly immersive fashion, and I’m thrilled to have the opportunity to share the experience with fans not only in North America again, but also to cross the narrow sea for the first time and bring the show to Europe.”

The inaugural run of the Game of Thrones® Live Concert Experience Featuring Ramin Djawadi kicked off in North America in February of 2017 after being conceived by Djawadi three years ago. The show was praised by fans and critics alike as a must-see spectacle for fans of the television series. The Guardian described the show as “Westeros brought to dazzling life.” Mashable called it “an epic musical journey,” while the New York Times praised it as “a symphonic spectacular.”

As rich as the stories, intrigue and world of Game of Thrones®, Ramin’s celebrated music for the show has resonated with fans from the very beginning, as the meticulously constructed songs underscored the emotional weight of key moments between beloved characters, lent scale to massive battle sequences and brought to life songs referenced in George R.R. Martin’s books. Ramin’s relentlessly popular title track alone has become an instantly recognizable pop culture phenomenon in its own right.

“Building upon the incredible response we received from the first tour earlier this year, Game of Thrones fans are in for a treat when the updated version of the Game of Thrones Live Concert Experience makes its debut in Europe and then returns to North America next year,” said Jeff Peters, Vice President of Licensing and Retail at HBO. “The Game of Thrones fan base reaches all corners of the globe, so we are excited a wider international audience will now be able to experience Ramin’s extraordinary talent.”

The t­our, produced and promoted exclusively by Live Nation in partnership with HBO Global Licensing, will continue to use innovative music tour production and video technology that will recreate the various realms found throughout Westeros and Essos as well as showcase footage from the show in addition to new imagery created exclusively for the upcoming 45 tour dates. Beginning its journey on May 8th in Madrid, the tour will visit 20 European cities throughout May and June. The North American leg will kick off 25 tour dates on September 5th in Vancouver and conclude on October 14th in Toronto.

Ramin Djawadi’s previous credits include the Grammy®-nominated score for Marvel’s 2008 blockbuster, Iron Man. Other film credits include Pacific Rim, Clash Of The Titans and Warcraft. In addition to Game Of Thrones®, Ramin also garnered Emmy® Award nominations for other television projects including the hit HBO® series Westworld, Flash Forward (ABC) and Prison Break (FOX). Among Ramin’s upcoming projects is the highly anticipated new film The Mountain Between Us, due for release in October.

Based on the bestselling fantasy book series by George R.R. Martin, Game of Thrones® is an epic story of treachery and nobility set on the continent of Westeros, where summers and winters can last years, and only the lust for power is eternal. The Emmy®- and Golden Globe Award-winning series has captured the imagination of fans globally, making it one of the most popular shows on television.

GAME OF THRONES® LIVE CONCERT EXPERIENCE 2018 DATES
All dates, cities and venues below subject to change.