Less Than Jake have been working on a new album for awhile now and plan to release it on November 12th via Fat Wreck Chords. The name of the album is See The Light and features 13 new tracks! While the band released a bunch of EPs last year or so, this is still their first “proper” full-length in 5 years. Skatastic! 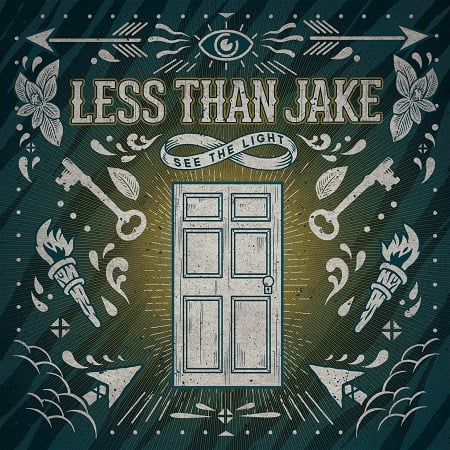 Florida’s Less Than Jake are officially back on Fat! Following the 2012 reissue of the Fat classic Borders & Boundaries and the subsequent EP collection Greetings & Salutations, it only made sense to bring LTJ back into the Fat folds for real. On November 12th, we’ll release their brand new full length entitled See the Light. This is the band’s first proper full length containing brand new material in over 5 years. See the Light was recorded by bassist Roger Lima at The Moathouse, his own studio in the band’s hometown of Gainesville, FL. Left to their own devices and with no time constraints, the band turned out 13 blistering tracks that will get your bones moving. Trombonist Buddy Schaub had this to say, “Our bass player Roger has been recording our demos since the beginning of the band and steadily has worked his way up, learning about studios from everyone we’ve worked with in the past. He even co-produced our last full length record GNV/FLA, but this time it was finally just the five of us in his studio, The Moathouse, and I think it is one of the closest representations of our band to date.” Roger elaborates on just what fans can expect, “Do you like punchy vocals, blaring horns, big guitars, bass and drums? Well, that’s just what we do! If you’re expecting retreads and repeats, this record will disappoint. It’s all new songs and new vibes, only recorded in our old school way.”

The recording of See the Light showcases what Less Than Jake do best: work together in a close-knit band. “The writing process was a cohesive group effort, adding ideas and sculpting existing ones as we went along. It represents a collective idea and that’s been a hell of a way to write a record,” says drummer Vinnie Fiorello. Their harmonious career, now spanning two decades, is tantamount to their status as genre leaders. The connection with their fans, crew, past labels and folks who’ve interviewed them all comes down to a kinetic energy that embraces the band’s longevity and keeps what they do fresh, respectable and exciting. See the Light will make you a believer in the band’s talent but more so in their drive to continue doing what they love, making music, traveling and developing connections around the world. The guys are in the throes of putting together a massive tour across North America in support of the new album, but in the meantime, catch them in the Southeastern US, Japan and even Brazil!

Besides that, LTJ will be playing Skanksgiving 2013 at Starland Ballroom in Sayreville, NJ on November 9th with Big D and the Kids Table, Mustard Plug, Red City Radio, Survay Says, The Waffle Stompers, Unbearable Slackers, and Backyard Superheroes. Tickets are on sale today at noon.

Clowns Premieres Music Video For “Does It Matter?”