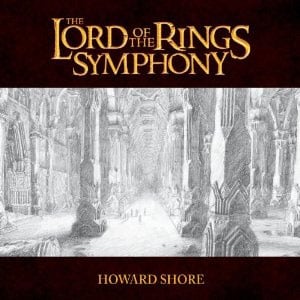 
The score for The Lord of the Rings film trilogy has been hailed as some of the greatest film music ever written. Sweeping in scope, it is a musical interpretation of J.R.R. Tolkien’s Middle-earth—an operatic tapestry of cultures, histories, languages, and people.

The Lord of the Rings Symphony – a six-movement piece spanning Howard Shores three film scores was created from the nearly 12 hours of music composed by Shore for the film trilogy. The six movements reflect each of the six books of The Lord of the Rings.

“Maestro Ludwig Wicki personally selected the musicians who comprise The 21st Century Symphony Orchestra and who perform on this recording,” said Shore. “Over the past four years he has perfected this music in Lucerne, Switzerland. His precision and supreme musicianship is evident throughout the recording. I congratulate him on his success and thank him for his masterful approach in bringing this score to life.”

This December marks the 10th anniversary of the release of the first film and soundtrack of the trilogy, The Lord of the Rings: The Fellowship of the Ring. Shore continued, “J.R.R. Tolkien’s The Lord of the Rings is very close to my heart. I have great respect for his writing and share the values he weaves into these stories of courage and honor, friendship and sacrifice. I love the inner aspect of his writing, the detail of the relationships, and his observance of nature.”

In tandem with the release of each of the films, single CD soundtracks of Shore’s music were released. Following the conclusion of the film series, three boxed sets containing the complete recordings from each of the films were also released. Live-to-projection symphonic concert performances have been performed in many cities worldwide and this fall 10 concerts are scheduled in the United States along the West Coast performed by the Munich Symphony Orchestra, Pacific Chorale, Phoenix Boys Choir and soloist Kaitlyn Lusk all under the baton of Maestro Ludwig Wicki. In 2010, Carpentier and Alfred Music Publishing released The Music of the Lord of the Rings Films book, written by Doug Adams.

The Lord of the Rings Symphony: Six Movements for Orchestra & Chorus will be released by Howe Records both in stores and digitally on September 13, 2011. You can pre-order on Amazon.com here.