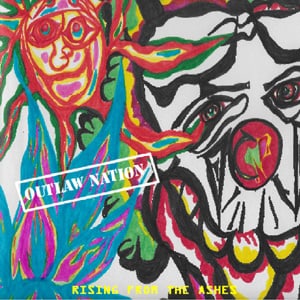 New Orleans reggae rockers Outlaw Nation are set to release their latest album “Rising From The Ashes” on October 1st.

After a 4 year silence OUTLAW NATION returns with RISING FROM THE ASHES! The band that has toured with everyone from SLIGHTLY STOOPID to 311, FISHBONE to ENGLISH BEAT is back with a FRESH new album and even fresher sound. Expanding on their eclectic musical vision! The album is due on OCTOBER 1, 2015 and you can expect plenty of TOURING!!

* OUTLAW NATION built a rock sold catalog of music in the early 2000’s following in the footsteps of bands like 311 and Slightly Stoopid. With a near break neck touring history for nearly a decade. The band slowed down towards the end of 2012. 8 albums have been released by the band and a small slew of EP’s have kept the band at the forefront of Reggae Rock and Pop music lovers minds.

The band’s latest release RISING FROM THE ASHES is yet another music bending gumbo of sounds. The first single ‘Lonely Hearts’ is a down tempo pop ballad that brings the art of ’emo pop’ similar to THE WEEKND to a new height. Expect lots of Reggae, Pop and more from this New Orleans based bunch!

RISING FROM THE ASHES

For people who like: Slightly Stoopid, Rebelution, Iration, Dirty Heads