Leave it to Dan Potthast (Mu330/Bruce Lee Band) and Rick Johnson (Mustard Plug) to release an album called Have A Great Summer in October. Their band is called Skarkanoid and its a nice departure from their ska roots. This time, it’s pop punk and sounds great from the previews! The album is also available for pre-order here.

Dan Potthast and Rick Johnson have been writing, playing, recording, or otherwise actively involved, in independent music for over two decades. Those on the outside may recognize the pair from their more popular groups, MU330 and Mustard Plug, respectively. But rest assured, both have been hard at work establishing their own solo careers as well.

Along the way, both musicians have crossed paths multiple times within the underground music community. These intertwined paths have created a patchwork of collaborations in the past, but none as direct as the album they are now releasing together,Sharkanoid – “Have A Great Summer”. With this record both artists have written and handful of songs and collaborated electronically between Santa Cruz, CA and Grand Rapids, MI before meeting to record at RISC Studios in L.A. The record also features guest musicians and vocalists: Laura Stevenson, Jeff Rosenstock, and quite a few more. The result is a solid collection of pop rock songs that lament the passage of time and the often misdirected ways individuals come to terms with it.

The new album is scheduled for release on Tuesday October 7th via New Orleans based Community Records and the pair is currently busy making plans for a West Coast tour early next year. With any luck, this newfound spirit of camaraderie will be an impulse they continue to follow. Like Bacharach and Costello, Johnson and Potthast posses’ unique, complimentary qualities that play well off one another. 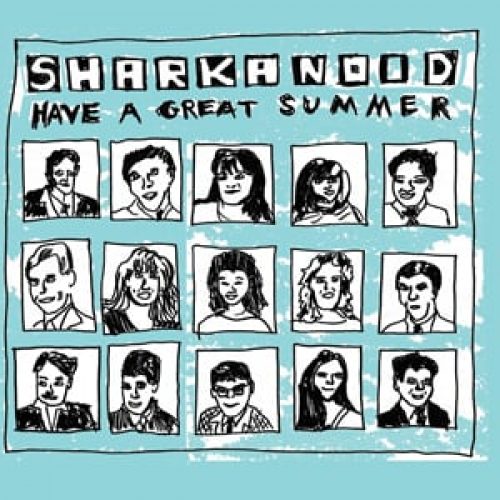 Sharkanoid – “Have A Great Summer”