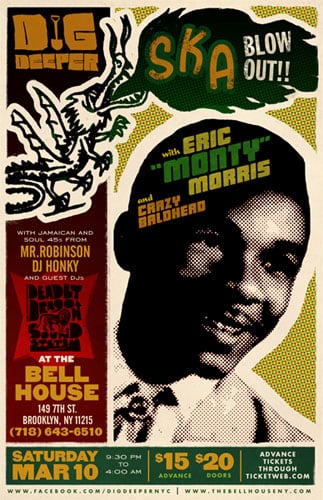 
Dig Deeper is honored to present one of the legends of Jamaican soul, ska, rocksteady, and reggae – Eric “Monty” Morris, in his first show in NYC in well over a decade, backed by Crazy Baldhead.

The original vocalist for the Skatalites, Eric “Monty” Morris had his first major solo hit in 1961 with “Humpty Dumpty”, a medley of nursery rhymes that proved immensely popular in Jamaica, and also helped mark a turning point in Jamaican music away from more standard copy-catting of American R&B into something rhythmically unique – ska.

He followed up with a prolific string of other ska hits – “Penny Reel”, “Sammy Dead”, “Solomon A Gundy”, “Strongman Sampson”, “Oil in My Lamp”, “Enna Bella”, “Money Can’t Buy Life” – almost too many to list here. He continued to be active through the rocksteady and reggae eras with songs like “Play It Cool”, “Say What You Say”, and “Last Laugh”. Over the years he worked with some of the biggest producers in Jamaican music – Duke Reid, Leslie Kong, Sonia Pottinger, Clancy Eccles, and Lee “Scratch” Perry – and duetted with the likes of Derrick Morgan, Patsy, Roy Panton, and Prince Buster.

Despite recording an almost uncountable number of singles, it wasn’t until 2011 that he put out his very first full album, “The Living Legends Collection – Eric Monty Morris” (Buckley Records), re-recording many of his old hits.

Monty’s first show in NYC was at the 1964 World’s Fair – his visits since then have been very few and far between, and we’ve been waiting for over a decade to see him back in town. This night will be a rare chance to see one of the absolute masters of ska in action.