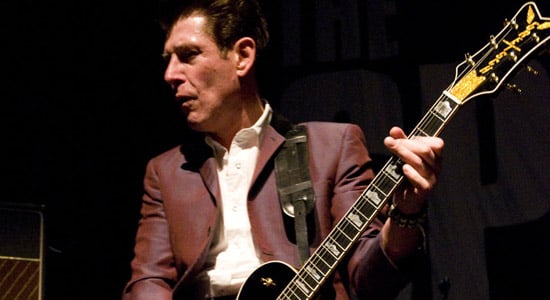 Roddy “Radiation” Byers of the Specials is bringing his ska/rockabilly band to the West Coast this spring! Well, Roddy and an American version of his band The Skabilly Rebels. This will be your chance to see Roddy performing with his new band and new songs in the States. No idea if he will be playing on the East Coast or not.

SKABILLY REBELS, the latest project of Roddy “Radiation” Byers, best known for his work as the lead guitarist of the ground-breaking 2-Tone ska band The Specials and as author of the international hit songs “Concrete Jungle,” “Rat Race,” and “Hey Little Rich Girl,” are pleased to announce the limited engagement 2012 Rebellion America Tour of California and the Southwest (tour dates below). This marks Byers’ first venture into America with his new band and new material.

Byers’ SKABILLY REBELS are the ultimate result of an audio formula he has been working to perfect since the day he stepped into the recording studio with The Specials back in the 80s – a fusion of the driving rhythm of ska and the gritty, hard edge of Rockabilly, also known as “Skabilly.” With the Skabilly Rebel’s debut album, BLUES ATTACK!, Byers and his boys bring this sound screaming into beautiful reality, spanning a variety of sonic flavors from the cajun-edged “Black Zodiac,” to the breezy-ska of “Desire,” to the roots-rock flow of “Judgement Day,” to the blues anthem “Another Rusty Nail.”

The unique vibe behind each Byers-penned original tune is tied together by that Skabilly heart and soul that flows through Byers’ vagabond voice and shredding guitar licks.

The USA version of the SKABILLY REBELS (featuring top American talents such as Danny Dean of Danny Dean and the Homewreckers) will be bringing this sound to the stage, playing Byers’ favorite Specials tunes (including those which he penned himself) and those hot new SKABILLY REBELS original songs in a set that will showcase that hard-hitting blend of ska/punk/rockabilly sound that Byers has become recognized worldwide for inventing.