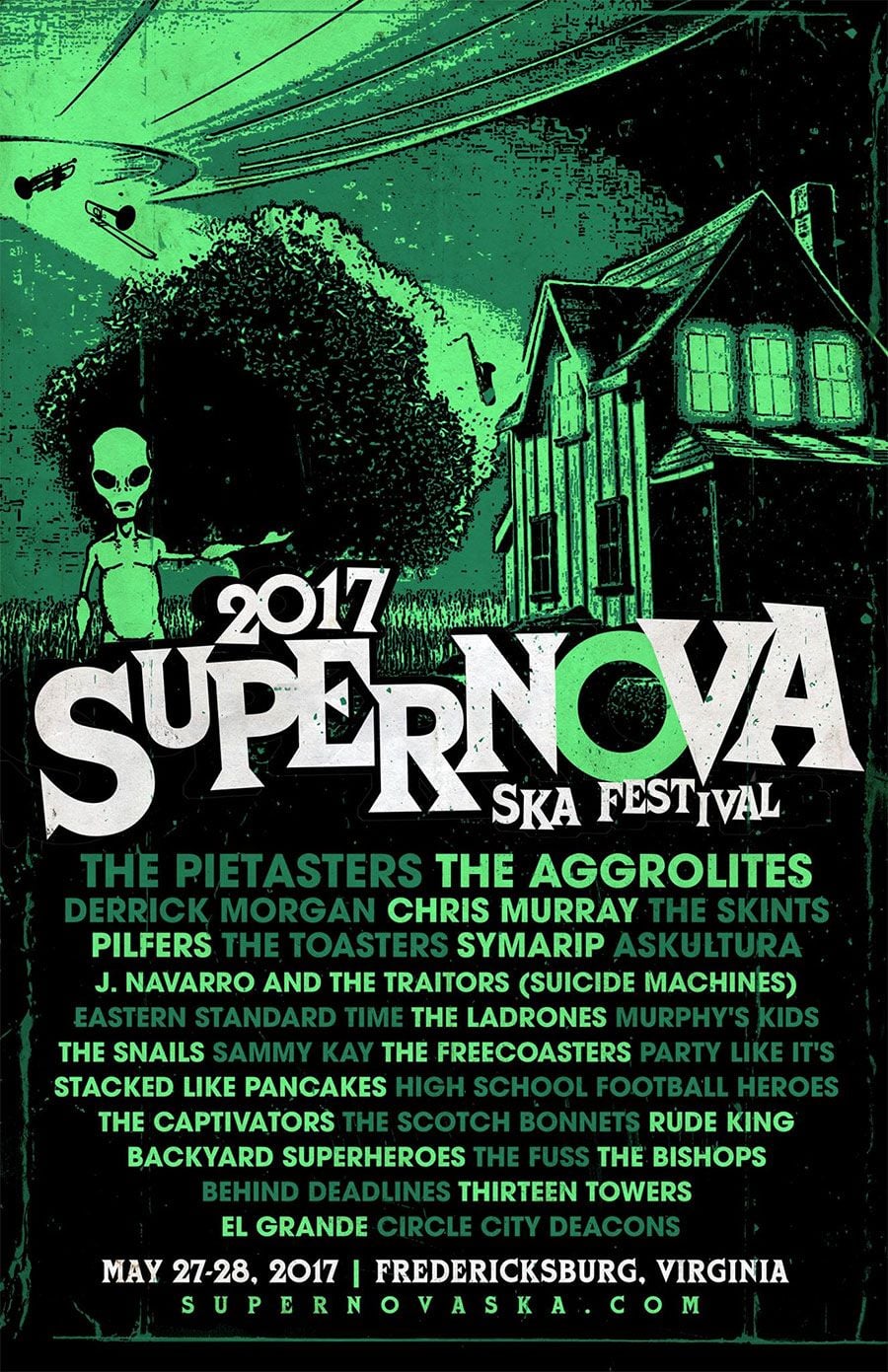 Supernova International Ska Festival isn’t playing around with this lineup! The Fredicksburg Virginia ska festival just announced their impressive lineup that will be happening May 27th-28th 2017 (Memorial Day Weekend). Some of the notable bands playing include: Derrick Morgan, The Pietasters, The Aggrolites, The Skints, Pilfers, Toasters, Chris Murray, Symarip backed up by The Bishops, Eastern Standard Time, The Snails, Sammy Kay and so many more! Damn, I hope I can travel down to VA for this one. Full details below.

The festival announced the news this morning:

It gives us great pleasure to announce the amazing line-up for America’s biggest ska party, the 2017 SuperNova International Ska Festival, that will take place next Memorial Day weekend in Fredericksburg, Virginia.

The festival will feature more than 30 ska bands from Jamaica, the United Kingdom, Canada and from all over the United States. Bands playing in 2017 include Jamaican ska legend Derrick Morgan, The Aggrolites,from Los Angeles, The Skints from London and ska and soul masters The Pietasters from Washington, DC. That would be a world-class line-up by itself, but we also have NYC’s most influential ska band The Toasters, Pilfers, Chris Murray, Symarip backed up by The Bishops, J. Navarro & the Traitors (Jason formerly of The Suicide Machines), the whirlwind known as Askultura, Eastern Standard Time, The Snails, Sammy Kay, Richmond’s own Murphy’s Kids and a ton of other great bands. NYC’s The Ladrones, DC’s The Fuss, Rude King from Texas, NJ-based Backyard Superheroes, Florida’s The Freecoasters, Party Like It’s, Philly’s Behind Deadlines, DMV’s The Scotch Bonnets, Stacked Like Pancakes, Thirteen Towers, The Captivators, El Grande, High School Football Heroes, and Indiana’s own The Circle City Deacons.

We’ve just put tickets online for sale at supernovaska.eventbrite.com and we’re offering several perks for purchasing them before October 1 like exclusive VIP weekend passes. Check out the details here: http://www.supernovaska.com/early-bird-tickets/.