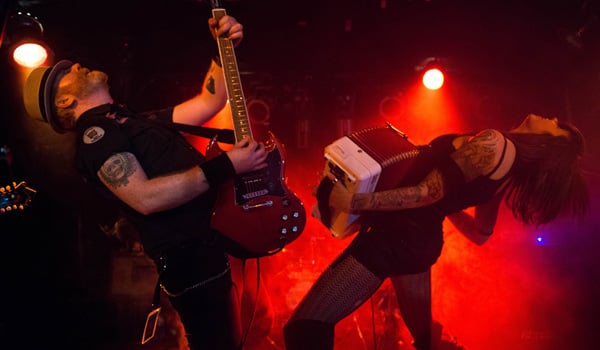 successfully raised money for Part 1 of The Hunger & The Fight in 2014 and now they plan on releasing Part 2 sometime this Summer. Part 1 was more of the older Mahones sound albums and Part 2 will be more of the recent Mahones sound: Fast Celtic punk. The band will be touring with The Dropkick Murphys this Winter and Spring so be sure to see them before Dropkick Murphys! I praised Part 1 so I’m really looking forward to Part 2!


The time has come to continue the journey! The Hunger & The Fight Part One was a huge success, and received rave reviews around the world, including Celtic Punk Album of the Year from Punk.ie (Ireland) – a great nod from the homeland! Because of you, we were able to keep the album independent, release it on our own record label, Whiskey Devil Records, and make sure it reached all corners of the Earth.

Time for The Hunger & The Fight Part Two! As you know, part one of the journey was an Irish Folk album, paying tribute to our ancestry and musical heroes. We played original and traditional songs and music, and told stories of Ireland, and specifically Dublin. Part Two is going to be a lot different. It brings the journey to America, and specifically to New York City, and the music goes from folk to PUNK. This album will showcase the other side of The Mahones. It’ll be full out Irish Punk.

The studio is re-booked for April. The album will be released in time for summer. We’d love to keep this album independent, too, and are launching the same popular fundraiser items (with some tweaks) as we did last time, since it got such a great response. If you ordered Part One, you’ll received a free download of Part Two as a thank you

All of the packages that are available are on http://themahones.co so check that out and help out a great band!