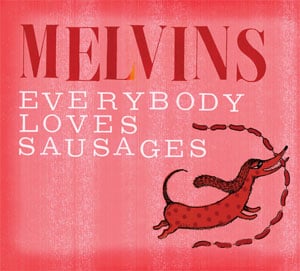 The Melvins are celebrating their 30th year as a band in 2013. After a very busy 2012, the Melvins are back with another album, this time a covers record. ‘Everybody Loves Sausages’ is set for release on April 30 through Ipecac Recordings. Melvins lead vocalist and guitarist Buzz Osbourne states, “This record will give people a peak into the kind of things that influence us musically. We REALLY like all of these songs along with the bands who actually wrote this stuff because first and foremost we are HUGE music fans.”


Along with a very unique track listing, the band has enlisted several of their friends for the album and recorded songs with 2 different incarnations of the band. Some of the guests include Scott Kelly of Neurosis, Mark Arm of Mudhoney, Clem Burke of Blondie, and Jello Biafra. Both line-ups of the band feature long time players Osbourne and Dale Crover. The Melvins proper are backed up by Jared Warren on bass and Coady Willis on drums. The 2nd line-up of the band features the Melvins Lite players consisting of Osbourne, Crover, and bassist Trevor Dunn (Mr. Bungle, Fantomas).

The Melvins had a huge 2012. Notably the band released their 18th album (‘Freak Puke’), 2 EPs (‘The Bulls and The Bees’ and ‘1983’), and a split 7” with NYC noise rock trio The Unsane. On top of all of that, The Melvins Lite did 51 shows in as many days stopping in every state as well as Washington DC.

The track listing for the record is below, including the original artist and guest musicians: