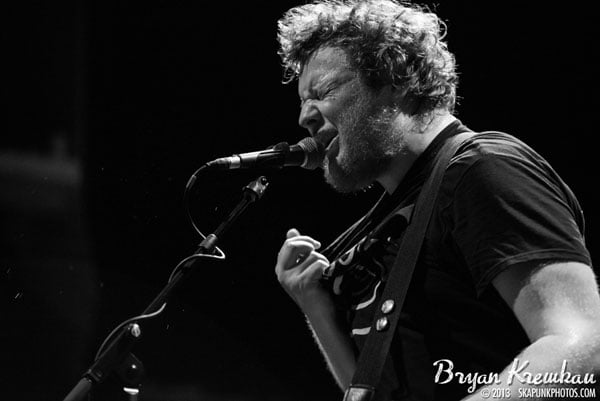 Australia’s The Smith Street Band have released “Surrender,” the first single from their highly-anticipated new album Throw Me In The River, produced by Bomb The Music Industry’s Jeff Rosenstock and available digitally in the U.S. on October 28th. The track will be available on all tour dates and will also be released as a tour-exclusive 7” with an additional b-side from the new record.


You can hear “Surrender” over at Vice’s Noisey here.

TSSB lead singer Wil Wagner explains that the song, which he’s been working on for the last year or so, is about “not wanting to force your vices or negative aspects of your personality onto someone else. It’s about finding hope and meaning in little existence and day-to-day life, instead of just coasting through and being numb.”

Through a constant cycle of touring and recording, the past few years has seen this Australian secret become a global phenomenon. With a discography that will soon include 3 full-length albums and 2 EPs, The Smith Street Band has been busy to say the least. They’ve toured China, Europe/UK, Australia and of course, the United States alongside bands like Frank Turner, The Menzingers, Restorations, Violent Soho, Joyce Manor, Cheap Girls and more. They’ve also performed at renowned Belgium festival Groezrock and made multiple appearances at Gainesville’s The Fest. As the buzz continues to follow The Smith Street Band wherever they go, with the imminent release of their third LP and touring plans in the United States, it’s only going to get louder.

audio stream, Noisey, Surrender, The Smith Street Band, Throw Me In The River