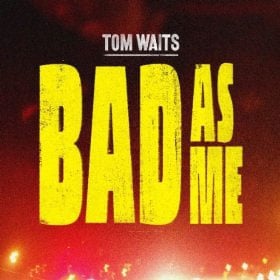 The rumors of Tom Waits releasing a new album were spoiled by Amazon.com and other sites the other day, so Tom Waits set the record straight by announcing that he will be releasing his next album “Bad As Me” on October 25th on Anti Records. The first single is available for streaming and purchase on iTunes. Tom posted a video on his website this morning that pretty much scolds the internet for spoiling his surprise. You have to see the video to see how he fixes the situation…

Bad As Me is Tom Waits’ first studio album of all new music in seven years. This pivotal work refines the music that has come before and signals a new direction. Waits, in possibly the finest voice of his career, worked with a veteran team of gifted musicians and longtime co-writer/producer Kathleen Brennan. From the opening horn-fueled chug of “Chicago,” to the closing barroom chorale of “New Year’s Eve,” Bad As Me displays the full career range of Waits’ songwriting, from beautiful ballads like “Last Leaf,” to the avant cinematic soundscape of “Hell Broke Luce,” a battlefront dispatch. On tracks like “Talking at the Same Time,” Waits shows off a supple falsetto, while on blues burners like “Raised Right Men” and the gospel tinged “Satisfied” he spits, stutters and howls. Like a good boxer, these songs are lean and mean, with strong hooks and tight running times. A pervasive sense of players delighting in each other’s musical company brings a feeling of loose joy even to the album’s saddest songs.
[Tom Waits]

The tracklisting for the new album is:

Pre-order Bad As Me at the Tom Waits Store.