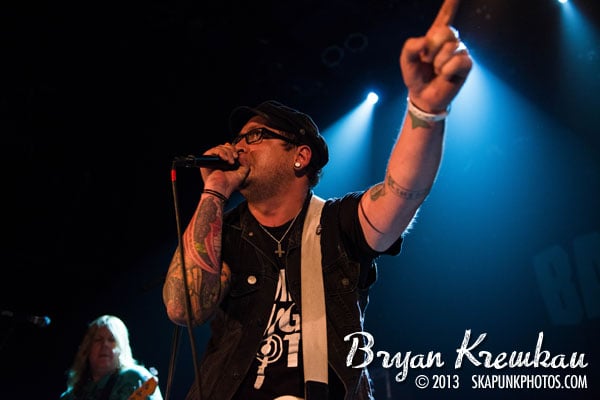 Versus The World will be releasing their third full-length album Homesick/Roadsick, which will be out on April 7th via Kung Fu Records. Hey, Kung Fu Records is back! In anticipation for the release, the band has teamed up with AltPress.com to premiere a new track called “The Santa Margarita,” which features guest vocals by Dave Hause.

Featuring members of Lagwagon and The Ataris, Versus The World has spent the last decade of their lives performing shows and recording, and have often times found themselves in a thrilling paradox of wishing for a familiar bed on tour only to yearn to get back on the road after coming home. Hence the title of their latest record, Homesick/Roadsick.

Following years of touring in support of their 2012 record, Drink.Sing.Live.Love., the band took some time out to recharge and returned to the studio with renewed drive and focus to record the new album. Working with producer Thom Flowers (The Ataris, Lagwagon) and mixer Ian MacGregor (All American Rejects, Katy Perry), Versus The World have partnered with independent label Kung Fu Records.

“We are very selective about new releases here at Kung Fu, these guys make such good records, I was bummed we didn’t release the last one,” says Kung Fu founder Joe Escalante. “I wanted to make sure we got this one. I knew it would be great. We are very proud of these guys.”

Homesick/Roadsick’s newly released song “The Santa Margarita” sets the tone of the record with a heavy dose of anthemic pop-punk and driving post-hardcore. The track pays tribute to fallen friend Tony Sly (No Use For A Name) and features guest vocals from popular singer-songwriter Dave Hause (The Loved Ones).

“I wrote the lyrics to “The Santa Margarita” after I’d gotten the news that our friend Tony Sly had died,” says vocalist/guitarist Donald Spence. “He’d taken us on a few tours early in our band’s life and I really didn’t know how to process the information. I’ve known people that have died… but this really hurt my heart in a different way. I think that’s because in addition to being a good friend I still really look up to him in many ways. I asked my friend Dave Hause to come in and sing on the chorus with me and we had a blast. He’s such fun person to have around. He ended up hanging in the studio with us for a while and singing on a few tracks. We’re really proud of these songs. I think it’s the strongest record we’ve made so far; a truly collective effort. I can’t wait to play these songs live.”

After some time off from touring, Versus The World is ready to return to stage to perform their latest record. The band will announce dates shortly but in the meantime Spence will be performing a handful of solo acoustic shows in February. Follow the band at https://www.facebook.com/vstheworldmusic for more information.

1. The Santa Margarita
2. The Black Ocean
3. A Storm Like Me
4. Seven. Thirty-One
5. A Brooklyn Rooftop
6. A Sight for Sore Eyes
7. Homesick/Roacksick
8. Bullet Train
9. Detox/Retox
10. Self Preservation is Killing Us All
11. Our Song

Versus The World Tour Dates: