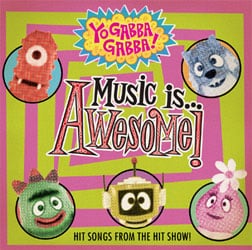 A new season of Yo Gabba Gabba (that trippy weird kids show co-created by the Bat Commander of the Aquabats) commences within a week! There are a load of people appearing on the show (for some reason) and some of them include: Band of Horses, The Aquabats, Anthony Bourdain, Of Montreal, Mos Def, Devo, Sarah Silverman, and Weird Al Yankovic. I’m curious to see what these people will be doing. I’m sure YouTube will have clips of their embarrassment.

Season 3 premiere week of Yo Gabba Gabba! is as follows (all times are 10:30 a.m. ET/PT on Nickelodeon):

• Tuesday, March 9 – “Bugs” – Weezer performs an original Yo Gabba Gabba! song, “My Friends Are All Insects” and Mark Mothersbaugh is featured in his “Mark’s Magic Pictures” segment. The episode also features a special remix segment arranged by Travis Barker.

• Wednesday, March 10 – “Doctor” – Anthony Bourdain plays the doctor when Toodee gets sick. Of Montreal performs an original Yo Gabba Gabba! song “Bananas, Rice, Applesauce, Toast!” and Biz Markie is featured in the “Biz’s Beat of the Day” segment.

• Thursday, March 11 – “Superhero”– Mos Def plays a superhero; Devo performs their song “Watch Us Work It;” Biz Markie is featured in the “Biz’s Beat of the Day” segment and The Aquabats perform a “Numbers” segment.

Download “Lovely, Love My Family” By the Roots at Filter Magazine. Visit the official site here.