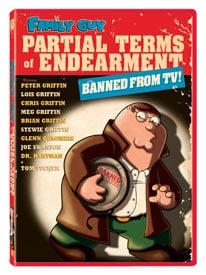 Family Guy’s banned from TV episode Partial Terms of Endearment will be coming out on uncensored DVD on September 28, 2010. This is the infamous, and controversial episode about abortion. Family Guy has gotten away with so much, yet Fox decides not to air an abortion episode? Hmm, all righty. Also on the DVD is the The Seth and Alex Almost Live Comedy Show special.

Drugs, sex, booze, violence and porn… they have dealt with it all, but the Griffin clan have never been so hilariously controversial when the most infamous unaired episode, Family Guy: Partial Terms of Endearment, arrives uncensored on DVD September 28 from Twentieth Century Fox Home Entertainment. Deemed too contentious to air on network television, the jokes stretch from here to maternity in a freakin’ poignant tale of what happens when Lois agrees to become a surrogate mother for an infertile couple against Peter’s wishes. A fan-favorite and censor’s nightmare since its freakin’ sweet inception in 1999, the debauchery of the boundary-pushing series is showcased in one of the most talked about episodes. The top selling seasonal TV franchise ever, “Family Guy” features the voice talents of creator Seth MacFarlane (“The Cleveland Show”) and comedic actors Alex Borstein (“MADtv”), Seth Green (“Robot Chicken”), Mila Kunis (“That ‘70s Show”) and Mike Henry (“The Cleveland Show”).

Synopsis
The jokes stretch from here to maternity in the hilariously offensive Family Guy episode you couldn’t see on television! Now legal to own (but just barely), Family Guy: Partial Terms of Endearment is a freakin’ poignant tale of what happens when Lois agrees to become a surrogate mother for an infertile couple against Peter’s wishes. You’ll laugh, you’ll cry… it’s your choice!