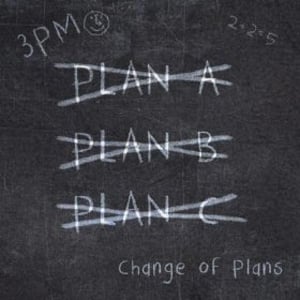 3PM sound like they come straight out of the turn of the century pop punk scene. Their sound draws a lot from bands like Simple Plan and New Found Glory as much as it does early Blink 182 with maybe a touch of Screeching Weasel or ALL.

While bands like Yellowcard and New Found Glory weren’t at the top of my “likes” list back then 3PM has a more energetic sound without the awful vocals that turned me off about those pop punk bands. While they do have some sappy pop songs I found myself enjoying the faster pop punk songs on “Change of Plans” which is the majority of the album. Those gems are very riff heavy while throwing a more furious punk sound at the listener. Musically, with the oldest member of the band being only 21, they have a solid sound with a ton of varied guitar work and some solid bass and drums that get individual chances to shine.

Going into “Change of Plans” I didn’t know what to expect. It’s hard to judge what you’re going to get nowadays when a band labels themselves as a pop punk band. The definition of that idea has expanded so much over the past twenty years. As I got to the end of the album …which got better with each track…I realized that I just had a pretty good time. As I mentioned before, “Change of Plans” was a very high energy album that was just plain fun. 3PM aren’t pushing the boundaries of anything new, but draw elements from pop punk bands of old. Not everyone needs to bring down the Berlin Wall. Some people just want to party on top of it like David Hasselhoff…and that’s not a bad thing. Is it?

Bottom Line: A fun fast-paced pop punk album that might have been released on Lookout! Records twenty five years ago.
Notable Tracks: And So The Story Goes, You Won’t Change Me, Start Over
Overall Rating: