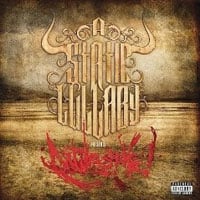 A Static Lullaby is a name I’ve seen floating around the interwebs but I just never got around to listening to their stuff before this album. Or maybe I just forgot since I hated it? The Fearless Records group sings & screams, over distorted guitars. Ya know, screamo or as other people call it “Post-Hardcore.” “Rattlesnake” is the 4th album by the band.

I’m not a fan of screamo, post-hardcore, whatever the hell you want to call it. There are so many bands that play the same thing that I couldn’t tell you the difference between any of them. A Static Lullaby offer up nothing new to the genre. Rattlesnake has a few good tracks like “The Turn,” and “Mourning Would Come” but other than that, I disliked this album. The band can play their instruments well, and the singing is fine. It’s just not a style I would ever listen to. I prefer straight forward singing, and not this melodic pussy singing in-between shit. But that’s what all the kiddies dig these days, and that’s what sells I suppose. I think I’ll go listen to my old school hardcore albums instead.