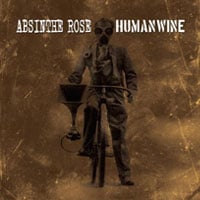 Absinthe Rose and Humanwine decided to release a split album, since they both hail from Boston and have sounds that can’t be classified in one genre. Absinthe Rose starts things off first 6 songs, and then Humanwine ends things with their 5 tracks.

I’m usually pretty picking on female fronted bands. But Absinthe Rose sounds great and the singer Kimbo Rose vocals’ fit that folk punk sound. There isn’t one set style that this band plays but they play a mixture of acoustic, folk, punk, and other random genres. I even can hear a little bit of dixieland or cow punk in there. As you can tell, it’s hard to classify them. Just listen to the second track “Consistency in Skepticism” to see what I’m talking about. There’s like a mixture of dixie and cow punk. Whatever the style, I like it.

The same can’t be said for Humanwine. Their sound is a mixture of gypsy, folk, etc. I’m not really digging their sound as much as Absinthe Rose. The audio quality is shitty and sounds like it was recorded with a computer microphone. The vocals of Holly Brewer isn’t as strong as Kimbo’s either. That’s my opinion though. I think I’d prefer if this was just a Absinthe Rose album to be honest.