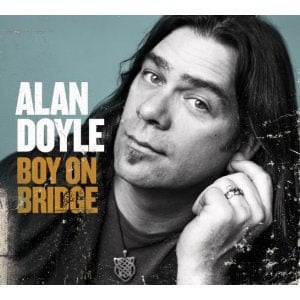 Alan Doyle of Great Big Sea has dabbled in side projects before, most recently with Russell Crowe with The Crowe / Doyle Songbook Vol. III. Russell Crowe helps Alan out again with some writing, but this album is all Alan! Boy On Bridge is so good, I just hope Alan goes back to Great Big Sea after this. My thinking is the more music from Alan Doyle, the better.


One thing that was noticeable with Great Big Sea’s last album, was that the band was venturing into non-Celtic territory. Alan Doyle’s Boy on Bridge is more of an Americana/folk rock/country album. The way it sounds, it seems like he’s been doing this style for years. This debut solo album is a perfect showcase on how awesome Alan is at singing and songwriting.

His first single “I’ve Seen A Little” is by far the catchiest song on the album, and one that makes you want to dance wherever you are. If that song doesn’t make you want to dance, then there’s simply no hope for you. The song is just a rockin’ twangy song that will get a lot of radio play.

“My Day” is a mixture of country/Americana rock and reggae riffs. That’s actually one genre that I’d love to hear Alan do more of, reggae. It would be amusing to hear. Alan is a talented guy that he could make any style of music work. “Testify” is another twangy rock song that could get some radio play. Another boppin’ tune that I really liked was “Light The Way.” It’s obvious now that Alan wanted to record something with more of a rock and roll feel that using bodhrans, tin whistles, etc. This song has a similar sound to GBS’ “When I Am King.”

Alan’s voice is very strong on all of these tracks but the most noticeable ones are towards the end of the album. Songs like “Love While Love’s Awake,” “The Rules Will All Be Broken” and “Where I Belong.” They are simple songs either with piano playing or just Alan singing. I guarantee those songs will be a highlight at his live shows, especially “Where I Belong.” He could even do that one unplug and make it sound excellent. I love the faster songs but the slow ones sound amazing as well. If another person sang these songs, I’m not sure I would like them or not.

Every song on this album was perfect for me. Alan has made an album that please his usually fanbase as well as new fans. As a Great Big Sea fan and Alan Doyle fan, I’m extremely happy with the outcome of Boy On Bridge and looking forward to hearing more solo music from Alan.

Bottom Line: My favorite album of the year so far!
Notable Tracks: I’ve Seen A Little, My Day, Light The Way, Nothern Plains, Perfect Excuse, Where I Belong
Overall Rating: