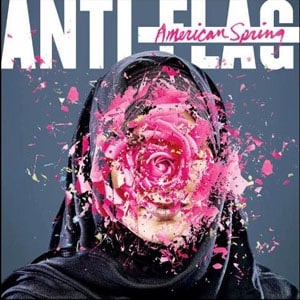 After a few years of touring, organizing movements, and being one of the most politically active bands in the world, fellow Pennsylvanians Anti-Flag set aside some time to record a new album chock full of political and social commentary.

I’ll admit that I was hesitant and reluctant to listen to listen to “American Spring”. With Anti-Flag gaining more exposure for their heavy political focus and with my own distaste and severe disinterest for politics, over the years I found myself distancing from the band. I also wasn’t much of a fan of their more rock influenced punk sound compared to their earlier oi influenced albums. While there are large traces of their modern sound on “American Spring”, the guys in Anti-Flag looked back into their discography to bring back some of that ’77 sound…whether it’s channeling Billy Bragg with their song “Brandenburg Gate” or summoning the Business with “Break Something”.

While I may not see eye to eye with the political views of the band, they have always been able to write songs that are poignant and compelling when it comes to their social views. This continues with songs like “Walk Away”, which deals with finding your calling in life and making something of one’s self and “Believer”, an uplifting song about believing in yourself even when you you’re at your lowest point. These types of songs are what drew me to Anti-Flag and punk in general in my youth.

With a couple listens of “American Spring” under my belt, I can honestly admit that my skepticism has dissolved and that this is definitely my personal favorite AF album since “Terror State”. Their other albums have had their moments and “The General Strike” was a step in the right direction but fell short of my expectations. With “American Spring”, Anti-Flag has managed to reflect back into their past while keeping both feet moving forward. Everything just seems to come together with this album. The music is fast and raucous at times, while poignant and introspective at other times…definitely a good mix of the old and new. I can see this album on quite a few “best of” lists at the end of the year and it certainly deserves those accolades.

Bottom Line: A solid punk rock album from the Pittsburgh punks that is seeping with political and social awareness. It’s a great mix of the old and the new and has brought me back into the fold for sure.
Notable Tracks: Fabled World, The Great Divide, Brandenburg Gate, Walk Away, Song For Your Enemy, The Debate Is Over (If You Want It)
Overall Rating: