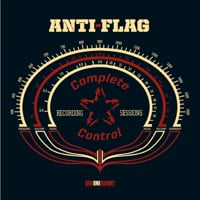 Pittsburgh punk band Anti-Flag was recently tapped for the third edition of Joe Sib’s Complete Control Sessions. The band hopped into the studio to record three live versions of songs from their past few albums as well as a cover of the Clash’s “Should I Stay Or Should I Go”. The vinyl release includes three more unreleased Clash covers.

With the Complete Control Sessions, I’m reminded a lot of the BBC Sessions and that most definitely isn’t a bad thing. I like the fact that the band went in and recorded live/studio versions of these songs. “Turncoat”, “This Is The End” and “The Economy Is Suffering” actually sound much better than the polished studio versions and “Should I Stay Or Should I Go” most definitely sounds like a Clash song with an Anti-Flag flare. The energy of an Anti-Flag show is prevalent. Anti-Flag provided some Clash covers on their own for the Complete Control Sessions with their take on the Clash’s version of the Sonny Curtis hit “I Fought The Law” mixed in with the “Guns Of Brixton”, a studio version of “Should I Stay Or Should I Go” and “White Riot”.

Although Anti-Flag’s “Complete Control Sessions” is only 7 songs long and runs at a little over twenty minutes long, it is a very fun and creative idea from the founder of SideOneDummy. It is always interesting to get a band out of their element and let them just have some fun with the situation.

Bottom Line: This is a fun listen with lots of replay value at a bargain price.
Notable Tracks: They’re all a pretty good listen.
Overall Rating: