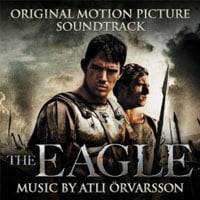 The Eagle is the latest sword and sandal movie. Looks similar to Gladiator and I highly doubt it will be as good. But trailers can be deceiving, so I’d give the movie a chance once it comes out on video. The movie is based on Rosemary Sutcliff’s classic novel The Eagle of the Ninth, and is set in 2nd-Century Britain. It follows two men on their dangerous and obsessive quest to solve the unexplained disappearance of the entire Ninth Legion in Scotland. Sounds interesting at least.


The film score is from Icelandic film composer Atli Örvarsson, who I don’t really know honestly. He’s part of Hans Zimmer’s score company, so you know he’s worked on those types of movies before. Some of his work includes Season of the Witch, Vantage Point, Babylon AD, Thick as Thieves and few others. I would imagine this is his biggest score to date. The Eagle starts out with something you’d expect to hear in a movie like this. Since the movie takes places in Britain/Scotland, the score has a big time Celtic flavor to it. I like the score immediately just because of that. There’s bagpipe playing but not so much that you think this is Braveheart. The track “May Your Soul Take Flight” is a good example of the bagpipes, and is perhaps one of the best tracks on the album as well. Many of the tracks are ominous and not action-packed, which makes me think how much action is in this movie? Not like that is a bad thing or anything, I just assumed there was based on watching the trailers.

Atli Örvarsson’s score for the Eagle is nicely done and I like the subtle usage of the bag pipe playing. It’s not over-used and annoying. I felt the score could have used a few more exciting tracks in there but overall, I really enjoyed this score and looking forward to hearing more from Örvarsson.

Bottom Line: You may not know Atli Örvarsson’s music yet, but you will!
Notable Tracks: The Return of the Eagle, May Your Soul Take Flight, I Will Return
Overall Rating: