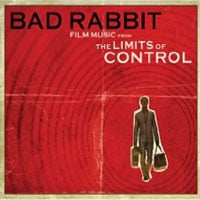 The Limits of Control is a film directed by Jim Jarmusch (Ghost Dog: The Way of the Samurai, Coffee and Cigarettes). The film centers on Isaach De Bankolé, who plays a criminal doing a job over in Spain.

Jim Jarmusch performs on this soundtrack EP under the name Bad Rabbit. The other musicians with Jim are Carter Logan on Drums, and Shane Stoneback on Organ and Carillon. The music is slow, guitar rock that just feels like it drags on and on. But that’s just the style, I guess. This album is only an EP, and there are 4 tracks total. If you don’t want all the other music from the movie, but like the instrumental, slow guitar rock from Bad Rabbit, this is something to get. I personally didn’t like the music all that much and got bored with it eventually.