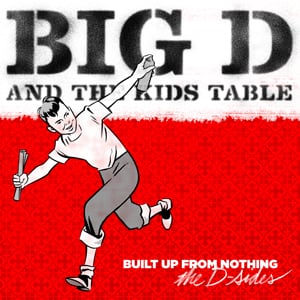 Over the course of a seventeen year career as a band you are bound to write and record plenty of songs that might never see the light of day. Sometimes those songs make their way onto compilations or EPs. Most of the time those songs are sent off to music oblivion never to be sung or heard again. “Built Up From Nothing” is Big D and the Kids Table’s attempt to pick these songs up off of the street and give them a good home…without stinking up the joint.

“Built Up From Nothing: The D-Sides and Strictly Dub” is a two-disc/double vinyl release of B-sides, rarities and unreleased material spanning the band’s entire career. The first disc mixes things up with some rare interview material rotating with an unreleased song on every other track. I didn’t think that the interview snippets would be that entertaining, but they did provide some insight into the thoughts and minds of band members during different times of their career. I found myself wanting to hear more of the inside track stuff. I still would have preferred to have everything grouped together instead of the “every other track” thing.

As with any B-sides album, you can see why some of the songs were left off of said particular album. Some songs just didn’t fit the sound of the particular album that they were recorded for while other songs are just bad and should stay unreleased. “Moping For Equality” sounds like it was from the “Good Luck Days” and just really doesn’t have good song structure while “Lash Out” just isn’t very good all around. What surprises me the most though are the gems that were hidden away for some odd reason. Songs like “DQ Girl”, “Half Way Home”, “Don’t Ask Just Do It Baby” and “Born On The Edge” should be lead tracks. The possibility of them possibly never seeing the night of day would have been a travesty. “DQ Girl” has quickly become one of my favorite Big D tracks. It has a mellow blues-y ska feel and lyrics that fun and stupid at the same time. I would love to hear an updated re-record of “DQ Girl” since it sounds like it was recorded on the fly in a basement somewhere outside of Boston.

The second part of “Built Up From Nothing” is the “Strictly Dub” part in which songs from the Big D library are remixed and dubbed out. There are also some unreleased tracks that get the dub version such as “Rude Boy Likes A Girl” and “I’ll Be There When You Get Back These Dubbed Streets”. Most of the tracks come from the “Strictly Rude” and “Fluent In Stroll” era, but there are some earlier songs that appear and get dubbed as well. I really enjoyed the dub side of the moon with these tracks and it really would work well as an album on its own. Big D even managed to make one of my favorite songs off of “Fluent In Stroll”, “Chin Up, Boy!” sound even better with the remixed version. There is just something about the Doped Up Dollies that can make anything better and the additional chorus is a welcomed bonus.

When reviewing a b-sides album, I try not to be critical of the flow of the album and just try to evaluate the content and the quantity of material that is included. What’s the point of only releasing five or six unreleased songs on a B-sides album? I prefer to overdose on as much material as I can get my hands on. With “Built Up From Nothing: The D-Sides and Strictly Rude” you get almost forty tracks worth of unreleased material and there is a little bit of everything. Unreleased songs, remixes, interviews, re-records…you name it, and it’s on here. There is easily more value on this double disc/vinyl release than the band is going to charge for it.

Bottom Line: For Big D and the Kids Table fans “Built Up From Nothing” is a must have. If this would possibly be your first time checking Big D out, you should probably pick up a regular studio release since this doesn’t quite exemplify their sound.
Notable Tracks: DQ Girl, Half Way Home, Rude Boy Likes A Girl, Chin Up Boy Dub, #5
Overall Rating: 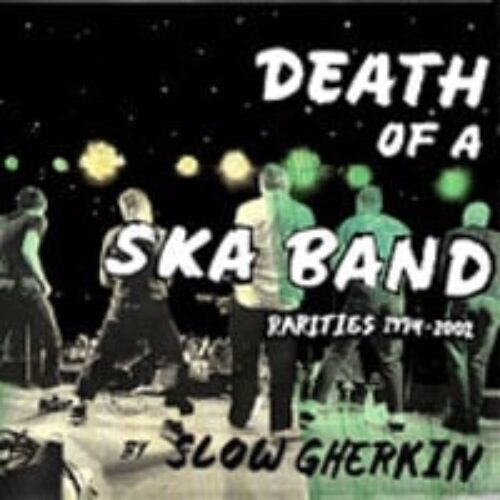 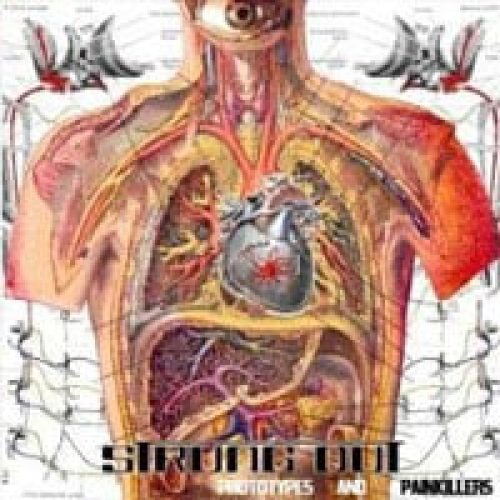 Strung Out – “Protypes and Painkillers”