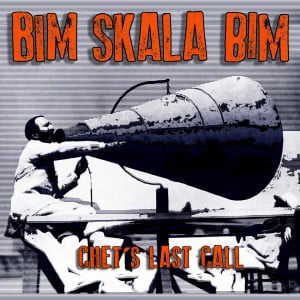 It’s been thirteen long years since the last official release from these Boston ska legends. That’s definitely way too long in my opinion, but “Chet’s Last Call” is absolutely worth the wait.

While “Universal” had more of a ska punk flavor and “Krinkle” focused more on the dancehall and reggae influences of the band, “Chet’s Last Call” goes back to the early two-tone ska roots found predominantly on Bim Skala Bim’s earlier releases. The album is danceable while maintaining a laidback chill attitude throughout…the perfect mix of two-tone and traditional ska.

“Chet’s Last Call” kicks off with the jangly bass line of “Everybody’s Got Their Style” which really sets the tone of what you have in store for you. Everything about the song is catchy and it’s a great song to kick off the album. It feels like an old familiar Bim Skala Bim song. “Summer of Ska” is an upbeat instrumental number that has some great horn parts. The next song titled “Buses, Boats, Planes, Trains, Taxis” is classic Bim and would easily fit right in on “Eyes and Ears”. “Get Us Out” is one of the slower tracks on the album and brings the bands smooth reggae to the forefront while showcasing one of the best horn sections in the entire genre. “Dance With Me Darlin” picks it up (get it?) with a fast two-tone/third wave hybrid sound.

Halfway through the album, Bim Skala Bim showcased their diversity and musical influences with sounds from all ages. The second half doesn’t let up on the gas pedal. “Hat When You’re Not” is just a fun ska song with some great songwriting as well as more of that BSB horn section goodness. I get a good laugh out of this song every time I hear it for some reason. It somewhat reminds me of “At Wo’s” off of “Bones. “Phony” is the shortest song on “Chet’s Last Call” but it probably gets the vote for the fastest paced ska track on the album. “On The Dance Floor” is yet another great horn and organ driven two-tone number that has that classic Bim Skala Bim sound, but with something of a modern touch. “Papa Don’t Put Too Much Pepper” changes the pace of things with a dancehall inspired number that has a unique sound of its own and sounds quite a bit differently than anything that I can recall in the Bim library. “Chet’s Last Call” comes full circle with the last track…a dub version song of the opening track “Everybody’s Got Their Style”.

I’ll admit it that when it comes to Bim Skala Bim I’m very biased. They played with the Mighty Mighty Bosstones and the Dropkick Murphys at my very first concert and I have truly loved every one of their albums with “Chet’s Last Call” continuing that trend. They have and always will be one of my favorite bands…period. Their sound is unique to the band and very recognizable. Whether you’re new to the ska scene or whether you’ve been around for a couple of waves, you owe it to yourself to give a listen to one of the unsung legends of the genre. “Chet’s Last Call” is a great starting point no doubt about it.

Bottom Line: Yet another addition to an already amazing musical library. There isn’t a bad song on this album.
Notable Tracks: Everybody’s Got Their Style, Hat When You’re Not, Buses, Boats, Planes, Trains, Taxis
Overall Rating: