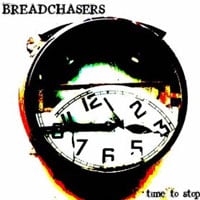 Breadchasers are an acoustic ska/punk/reggae/dub six piece from Nottingham, England who is fairly new to the scene. “Time To Stop” is their debut release and, although raw and a little rough around the edges, provides a fun and entertaining listen.

The Breadchasers say that they are influenced by all things ska and the various influences show through. “Latin Goes Bread” is their version of a Skatalites song while songs like the two-tone sounding “Biggest Gangsta” and the faster upbeat “Time Ticks By” shows that the Breadchasers have all waves covered.

As I mentioned before, some of the songs on “Time To Stop” are raw and kind of floaty and drag on but the songwriting is fun and witty as well as socially conscious. I’m reminded a lot of some of the earlier Specials songs.

I have never really been a huge fan of acoustic material but with the Breadchasers they have that sound but with a full band that fills out the songs very well. They are still new to the scene having only formed in 2009 but with a little time I think that they can become a really tight band.

Bottom Line: Semi-acoustic ska/reggae dub from the UK that is raw but has potential.
Notable Tracks: Biggest Gangsta, Time Ticks By, Noone Believes
Overall Rating: