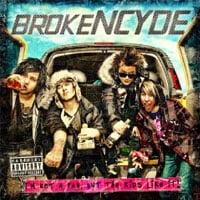 Record Label: Suburban Noize Label Group
Genre: Crunk
Buy on Amazon.com
One of the most hated bands on this year’s Warped Tour, and they are probably one of the most hated bands in music today besides Kanye West right now. And with good reason! One could argue why Brokencyde are so hated but it could be that they are just so fucking horrible! This music should be used to torture terrorists.

The band plays crunk, a style of music that’s far worse than screamo, emo and nu metal. Yes, you heard me right, something worse than emo! Mixing hip hop, dance pop, screaming, and Christian music is crunk. Whoever thought to mix all the worse things in the world into one thing should be shot. Besides the whole crunk thing, anyone that uses autotune is a fucking hack and doesn’t deserve the attention. I couldn’t even tolerate listening to 20 seconds of one song. Congratulations Brokencyde, you are the worst band in the world, come up and accept your award. It’s a big pile of shit, stuffed in a bag. You deserve it, you really, really do!

Bottom Line: I would throw this CD against the wall but I’d rather just sell it. Let someone else’s ears bleed instead.
Overall Rating: