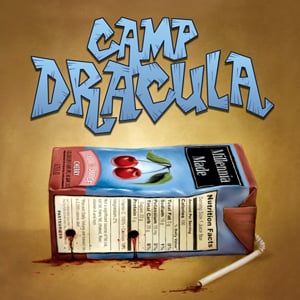 One could consider Camp Dracula the Less Than Jake of synth rock. They have a novelty charm with quirky songs like “Castlevania: Vampire Killer” and “Hot Cop”. Once the novelty wears off though, you’re left with a bland album that lacks a direction.

Other than some goofy songs and band name I don’t really find much that is intriguing about Camp Dracula. What you have is a lackluster synth rock album (can you have a luster-filled synth rock album?) that gets quite annoying with dual keyboards and Simple Plan melodies.

Some songs have glimmers of hope like the catchy keyboard riff and drumming in “Blown Away”, but tracks like “Axis II” and “Subtlety Ain’t My Thing” flounder like a wet noodle.

“Camp Dracula” wasn’t god awful…there is some pop potential there, but they need to get rid of one if not both keyboards and try to find the direction that they want to go in and stick with it.

Bottom Line: Synth rock with some punk influence that could have a more driven sound without the spacey keys
Notable Tracks: Hot Cop, Blown Away, Stumpin’, 2032
Overall Rating: