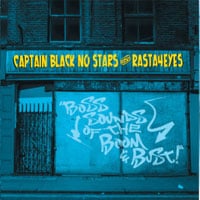 Captain Black No Stars and Rasta4eyes released a split CD on the excellent Do the Dog Records last year. The first 4 tracks are from Captain Black No Stars, who hail from King’s Lynn, UK. The band has a dirty reggae/ 2 tone sound and I’m not sure if I like them more than Rasta 4 Eyes. Both bands are decent though and worth checking out.

The first song on the album is “Rivers of Blood,” which sounds cool, just after awhile the chorus gets annoying. No worries, the rest of their songs are good. It’s not like “Rivers of Blood” is a bad song, just the chorus could be less repetitive. After those guys are Rasta 4 Eyes who are from Northwest UK. The more that I think about it, I think I prefer the songs from this band than Captain Black No Stars. They play bouncy ska, which is something I love; especially from the UK. I definitely want to listen to a full album from Rasta 4 Eyes! That’s what’s great about split CDs sometimes. You discover bands you wouldn’t normally hear and want to hear more from them. Regardless of what I said about either band, check them out for yourself and see which ones you like or don’t.

Bottom Line: If I had to pick a better band, it would be Rasta 4 Eyes
Notable Tracks: The Lighter Song, Oscar & Arthur, Good Old rock N Roll
Overall Rating: