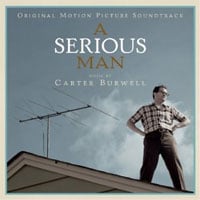 A Serious Man is one of the latest films from The Coen Brothers. It stars Michael Stuhlbarg, Sari Lennick, Fred Melamed, and Richard Kind. It’s about an ordinary man who is trying to find balance and understanding in the world. I haven’t seen the movie but I’m not sure I’m going to. It doesn’t seem like a movie I would enjoy. The Coen Brothers movies are hit or miss with me; sometimes I like them and sometimes I don’t.

The Coens, like other filmmakers, use film composers that they have used in the past. Carter Burwell again is tapped to compose the score to this black comedy/drama. Burwell has composed most Coen Brothers movies except O Brother. Where Art Thou? The score is very quiet; filled with short dramatic cues. I think my main problem with this album is the tracks are way too short. Just as you get into them, they are over. It’s a bit frustrating. I mean, what’s the sense of including a track that’s only 18 seconds long?

When the tracks are longer than a minute, I liked hearing the music; especially in the tracks “The Roof” and “Canada.” The music reminded me something in Shawshank Redemption. The score mainly uses piano, guitar or harp, and some strings. Besides the score, there is music (“Somebody To Love,” “Comin’ Back To Me,” “Today”) from Jefferson Airplane. I wish these tracks were longer because this could have been a really good score.

Bottom Line: Could have been better!
Notable Tracks: The Roof, Canada, A Serious Man
Overall Rating: