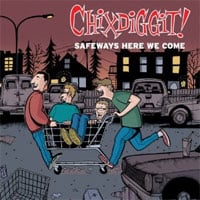 The last time Chixdiggit released an album in 2005, the United States had a different president, Michael Jackson was found not guilty of touching little boys, and there was a terrible hurricane in New Orleans. People come and go; things change but one thing that doesn’t change is Chixdiggit’s sound and I’m happy about that!

The Fest 13 announces first round of bands including The Descendents!