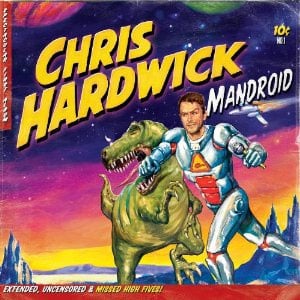 Chris Hardwick has become the King of the Nerds without appearing on some lame TBS game show. Quietly, he has built up this Nerd empire at Nerdist and now appears as the go-to-guy for hosting things like the Talking Dead, Comic Con panels, BBC series and other nerdy/geeky things. Everywhere you look, he’s there. I don’t mind since I’ve always found him funny, even back in the Singled Out days. Besides that, he has one of the most popular podcasts out there and continues having success in stand-up as well.

Mandroid is his first stand-up special on Comedy Central and it’s a hilarious take on all things nerd. Of course if you’re just a fake hipster nerd, you’ll be offended since Chris makes fun of you. But if you love pop culture, TV series, movies, video games, comic books, and other geeky things, you’ll appreciate this stand-up from Hardwick.

The stand up bits I loved the most from Chris include him making fun of ghosthunters and all the TV shows that have spawned from it, Hipster Nerds, breaking up with Facebook, vampires, gramp stamps, and dirty cartoon voice-overs. The Patrick Swayze joke particularly made me laugh out loud when I first heard it.

Besides Anthony Jeselnik’s latest stand-up album, this was definitely up there with one of the funnier comedy albums in recent memory.

2010 Streamy Awards nominees have been announced